We Had a Holly, Jolly Christmas!

I can't believe that Christmas Day has already come and went!  Where HAS this year gone?!

Like many people, Christmas isn't just one day of the year for us...but rather, the celebration starts weeks ahead as our church enters the Advent Season.  As the big day draws closer, the festivities begin!

Just like years past, J-Money and I jumped in the car and went around town looking at Christmas lights...this time around, we had some friends join us and it made it that much more fun!  Especially as we turned into one of the higher-end neighborhoods and all of a sudden, there were 4 deer next to my car...and they weren't part of the light show!!!  Talk about a bit of a surprise!!! 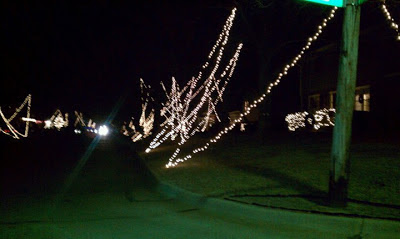 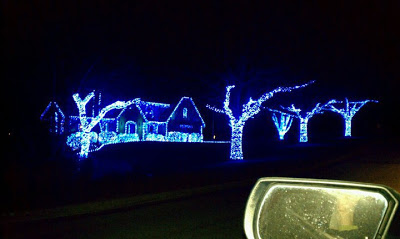 As we began to pack our bags and prepare for Christmas at my parents', I received an offer on one of my listings...I was extremely concerned that we weren't going to get the deal brought together, but as luck had it, negotiations went well and the house sold!  It was a VERY welcome omen for my sellers as they needed to sell before the end of the year...and we made that happen! 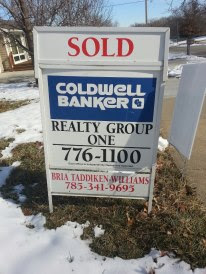 We ended up doing our gift exchange a bit early this year--I bought Justin a Craftsman tool chest for Christmas, but then realized I couldn't get the crazy thing home in my car!!!  Fortunately, the guys at Ace Hardware were kind enough to hold it in their backroom for me, but that meant we wouldn't be able to pick it up on Christmas Day...so it was a good excuse to open presents before we left town :-)  Thankfully, J-Money was actually excited about it!  Now, we won't spend 30 minutes trying to chase down a screwdriver that might be in the hardware basket in the hall closet...or in the bucket in the basement...or on the bench in the garage...you get the point ;-)  Now, we'll be organized! 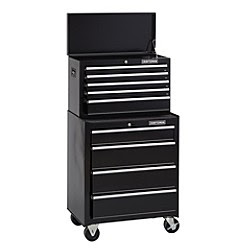 I have to admit--Justin really surprised me this year!  Not only was it the first time that we didn't buy a joint gift for the two of us, he actually wrapped the present, too!  If you follow me on Facebook, you might have noticed that I found out he bought something at Best Buy, thanks to our award card being linked to my email account...whoooops!  I had a variety of guesses for what he purchased, but he bought me a Kindle Fire!!!  I have been wanting an e-reader for quite a while now, but I'll also be able to use it just like an iPad when I meet with clients...and at a fraction of the cost!  I love that my husband understands my appreciation of a great deal ;-) 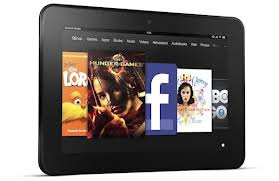 But, it was finally time for some fun with family and friends...I had spent a snowy Thursday preparing homemade tamales.  They were fairly time-consuming, but super easy to make.  If you know your way around a kitchen, you can certainly make tamales!  Just make sure to have ALL day to spend in the kitchen.  And plus, considering how AMAZING your kitchen will smell, you won't want to be anywhere else!!! 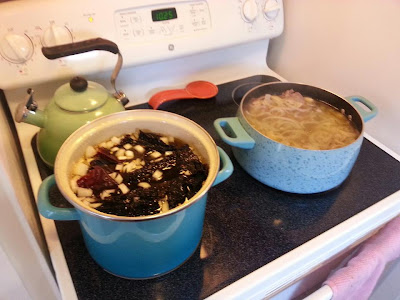 I'm always up for a culinary-challenge, but a party with our good family friends was inspiration for the tamales...Growing up, our friends, the Jacksons, used to host a HUGE Christmas Eve buffet at their house.  As everyone grew older, the Christmas Buffet slowed down.  A few weeks ago, some of us gathered at their son's graduation from K-State and Marly suggested we all get together over Christmas...and before I knew it--or before my brother knew it--I had organized a party for the two families at my brother's house!

My brother and his wife have an awesome space for hosting crowds.  It's an old detached shed that has a kitchenette, bathroom, wood stove, you name it...deep down, I'm a bit envious!  Anyhow, I told my brother we were getting together with the Jacksons and we were doing a Mexican potluck at his place...Fortunately for us, he went for it and next thing you knew, "Feliz Navidad" was in the making! 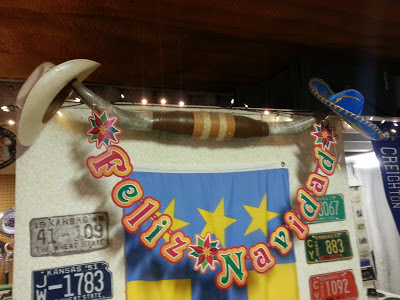 We ate tons of homemade Mexican cuisine, sipped on Cranberry Margaritas, Lime-a-Ritas and Corona...and then the beer pong table went up.  Usually, that would mean a big UH-Oh, but we were a pretty responsible group that night :-)  Christian and Justin had a great time teaching the parental units how to play beer pong...and turns out, my mom is a pretty good shot! 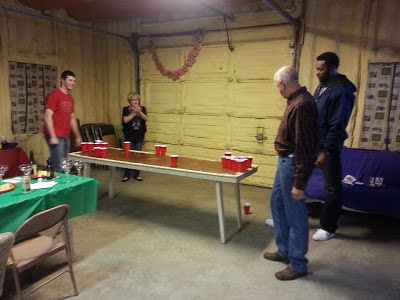 You may have to click on the picture to make it large enough, but check it out--Oriental Trading doesn't seem to spell-check their banners!!!  At least, 2 out of the 3 banners were spelled correctly! 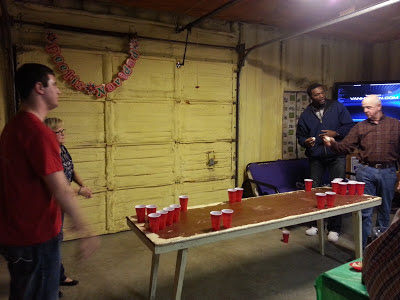 This year, the baby of the family was able to take in her surroundings!  Last year at this time, she was only four weeks old and would just lay in my lap and sleep, sleep, sleep...it's crazy how much things change in just a year!  When we started to open presents, she was still a ball of energy, but she quickly slowed down and nestled up in her Aunt Bri-Bri's arm.  That little girl just has a way of stealing my heart and I cherish every moment I have to spoil her with love!!!  The addition of a baby--well, now toddler--definitely changes a holiday celebration...but it was also a good reminder that without a certain baby, we wouldn't even have something called Christmas to celebrate. 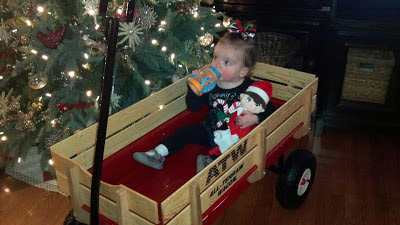 And finally, Christmas Day was here!  It was time to pack the bags, pack the presents and head back to the Little Apple.  It probably wasn't the most "Christmassy" movie to watch, but we caught the opening of Django Unchained.  Anytime Quentin Tarantino makes a movie, you know it's going to be good!  And he did NOT disappoint!  Jamie Foxx did an awesome job, and Leonardo DiCaprio did an awesome job.  There were a few times I had to close my eyes...and a few times I caught J-Money squirming in his seat...blood and gore aside, it was definitely worth waiting in line for! 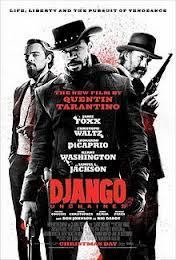 All-in-all, it was another holly, jolly Christmas.  It's always a blessing to spend time with family and friends, and spend time reflecting on why we celebrate the holiday.  Now, it's time to change gears and start preparing for a new year.  2012 brought many changes to our household and frankly, I'm quite ready for some monotany!
Posted by Taddy-Long-Legs & J-Money at Wednesday, December 26, 2012 No comments: