Work has been crazy busy--which is good and I'm most grateful for all the business...but after living off of nothing but adrenaline for the past several weeks, I'm starting to wear down.  I keep telling myself to hang in there.  And that before I know it, the 70 hour work weeks will be traded for days home with a baby.  Granted, that still won't be easy and the good Lord only knows that I'll be beyond exhausted--but at least the exhaustion will be for a different reason :-)

In addition to the long work weeks, I'm really starting to notice the heat.  Several Sundays ago, I had my first experience with overheating...and it was at 10:00 in the morning...at church!  I wasn't sure what I was going to do because after church, I was meeting with a builder in 100+ weather at a house that had just been framed...oh Lord, help me!  Fortunately, I made it through that meeting but it still took me about a good 5 hours of sitting in the air conditioning before my body felt like it was a "normal" temperature again.  And then it was time to go meet another builder out in the heat!  I'm quickly learning to appreciate the days where the high is "only" in the lower 90s and to keep tons of cold water on hand!!!

I guess the one good thing about being pregnant and exhausted is that it really makes you enforce boundaries and limitations.  Last year at this time, I was just going, going, going and I never forced myself to stop.  But if everything goes as planned (fingers crossed!!!), I'm headed into the office tomorrow for a few hours and then I'm turning off my phone and setting my email to "vacation" status...it will only last through the rest of the day, but to have a good solid couple of hours off will be HEAVEN!!!

Baby-wise, we had our 6-month check up with the doctor last week.  I'm up a total of 10 pounds from my pre-pregnancy weight...woo-who!  Justin actually lost 5 pounds, so now we're even-steven with our weight gains.  Doc says my belly is measuring "perfectly"and from what could be felt while pushing on my stomach, baby girl's hanging out sideways!  And like always, she was moving and grooving during the appointment.

On a related note, Justin's felt her kicks several times now.  At first, he thought it was me making my belly move but I don't have that kind of control over my abs anymore ;-)  And just the other night, I had my phone on my stomach while laying in bed and all of a sudden, I felt a kick and saw my phone move at the same time--I thought my mind was playing tricks on me, but nope!  I will say there have been a few times that the kicks have HURT and now that I know she can make objects outside of my belly move, I guess it's time to accept that her movement will only become more and more visible!

And on a totally UNrelated note, check out our first bits of produce from our garden!  It seemed like the  veggies would never grow nor ripen, but they did!  Based on all the blossoms and buds on the veggie plants, something tells me we will have peppers, tomatoes and cucumbers out the wazoo!

Well, well, well...I think some pregnancy symptoms are full-blown around our house!

One of the questions I get all the time is "How have you been feeling?"  Nowadays, it's not such a loaded question, but my typical response is, "Pretty good--but I've been having some crazy back pain." And then I'm met with some odd looks...

But--I thought pregnant women were supposed to have back pain?!  I have tried to explain to people that the pain is almost like a pinching pain, in between the lower half of my shoulder blades.  When I sit for more than 15 minutes, it's just out of control.  Standing isn't near as bad and walking actually makes it feel MUCH better.  Again, when I explain all of this, the looks remain odd!

So, I did what I naturally do when I have an ailment--I go online.  For once, my research did NOT say that I was dying from some rare, awful disease...but rather, that my upper back pain is most likely due to being top heavy.  When I read that, I couldn't help but chuckle!  NEVER in my life have I been top heavy--but thanks to this little girl, my upper body is out of control.  I always laugh and say that if I ever face-plant while walking, you'll know why...lol.  In fact, the change in my upper body was one of the "symptoms" that first made me wonder if "something wasn't up." When we announced my pregnancy, one of my friends warned me that it would happen because she's built just like me and that's where she gained all of her weight.  And sure enough, I'm pretty sure she was right!  And just to think...I have yet to develop the more-typical lower back pain!  But if anything, I'm sure to keep Victoria's Secret and Tylenol in business for a few more months!

At my 3-month appointment, I hadn't gained any weight.

At my 4-month appointment, I had gained two pounds.

At my 5-month appointment, I was up a total of 5 pounds.

And Justin was up a total of 15 pounds.

Amazingly enough, you can't tell that he's even gained a single pound.

For those curious about the bump progress, here you go!  Just a few days shy of 24 weeks.. 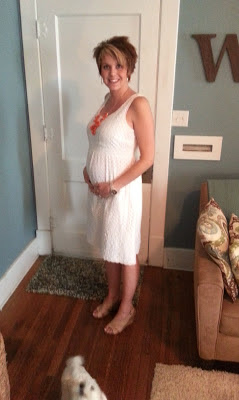 Hopefully, my next post will have some "after" pictures of our bathroom "renovation."  If all goes as planned, new flooring, wall treatment and hardware is scheduled to installed this week!  It certainly won't be a dramatic change, but it should help update the space and make it feel a bit less stark.  After several years of saying "we need to get it done," it will be nice to actually HAVE it done and be able to enjoy the outcome!
Posted by Taddy-Long-Legs & J-Money at Monday, July 08, 2013 No comments: