Last weekend, we checked a "first" off of our list for Akinya...she went to her first K-State Basketball game!

We had talked about going to some games earlier in the season, but Justin was concerned about the noise hurting her ears...plus, being around such a large number of people during cold & flu season made him even more anxious.

Then, the invitation came.  Legends Weekend was once again upon us and it was time for Justin to take his annual trip down to the hardwood for a halftime presentation.  You see, every year, K-State hosts a reunion for all of their former basketball players--there's always the game, plus some sort of meal.  I made the executive decision that we were going--after all, by mid-January, Akinya's immune system should be fairly strong!

Finally, the day was here.  We started at the new football West Stadium Center. 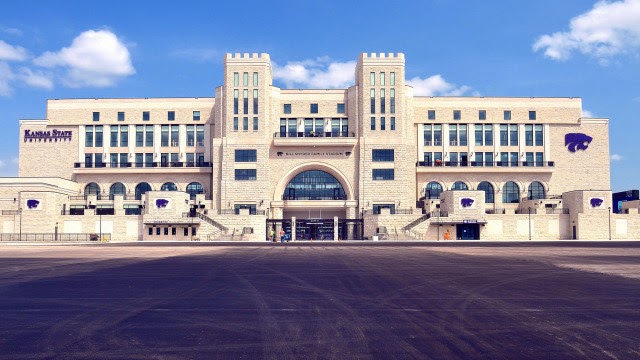 We were originally supposed to have breakfast and the recognition ceremony of the 1964 Final Four team at the Training Table...turns out, they had recruits down there, so we had to meet elsewhere. 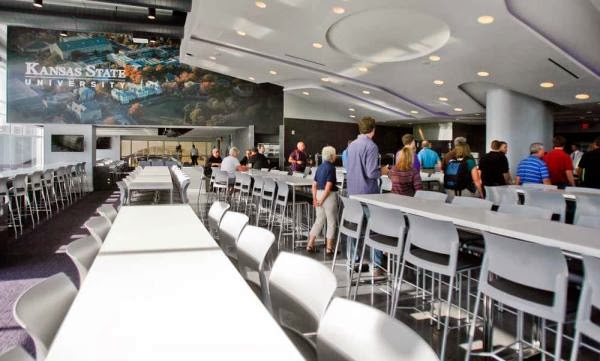 We were moved to the concourse area of the West Stadium...I totally stole these two pictures off of the web, but the space was gorgeous!  It was a perfect spot to have breakfast and check out the field! 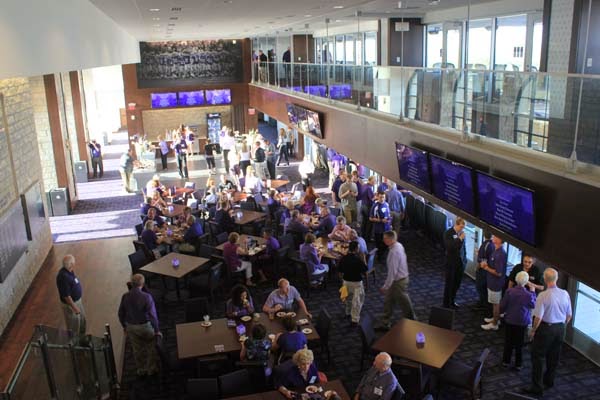 The morning sun was VERY bright, so our "tourist" photos didn't turn out the best...but you could still see the field in the background! 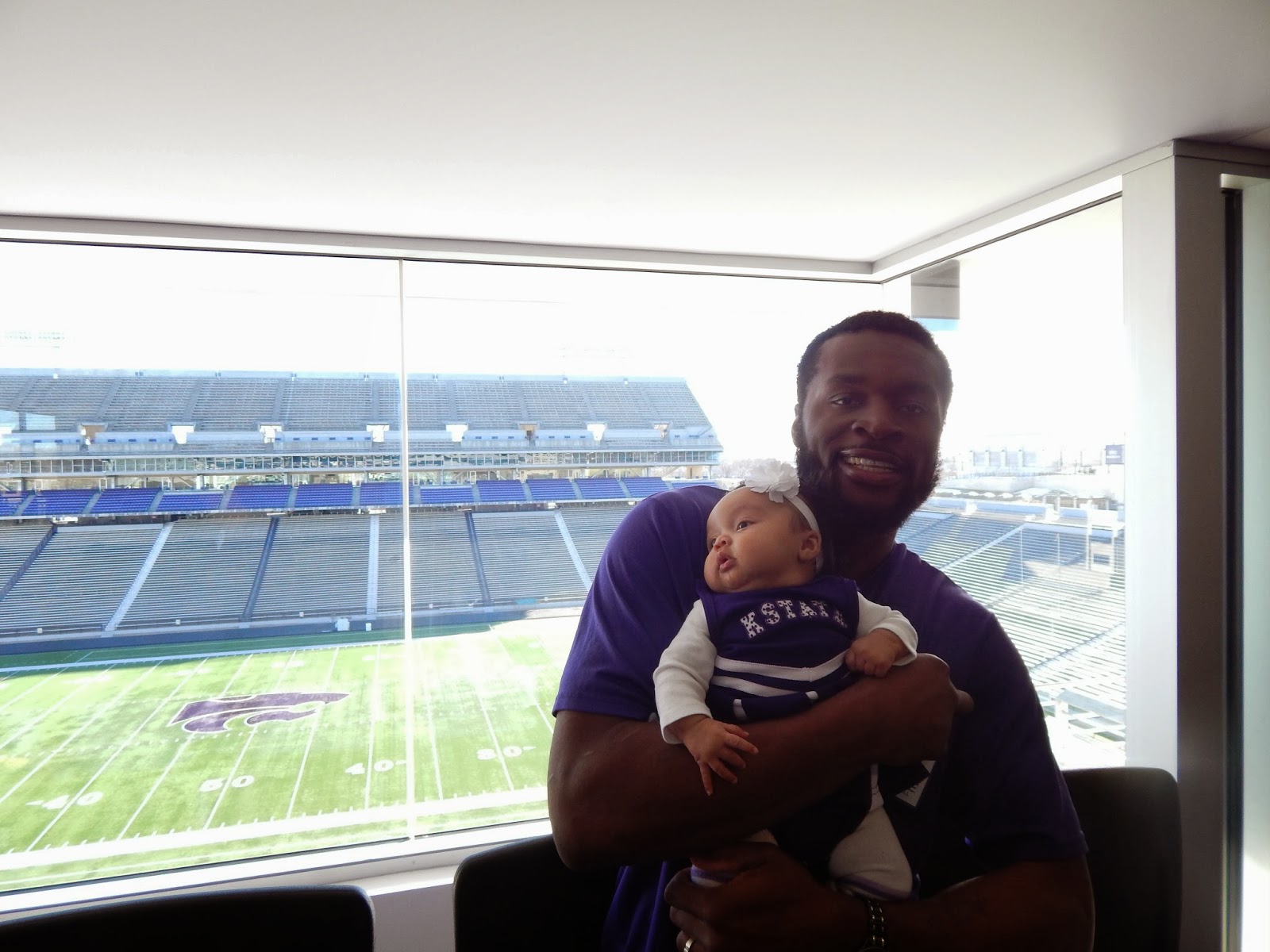 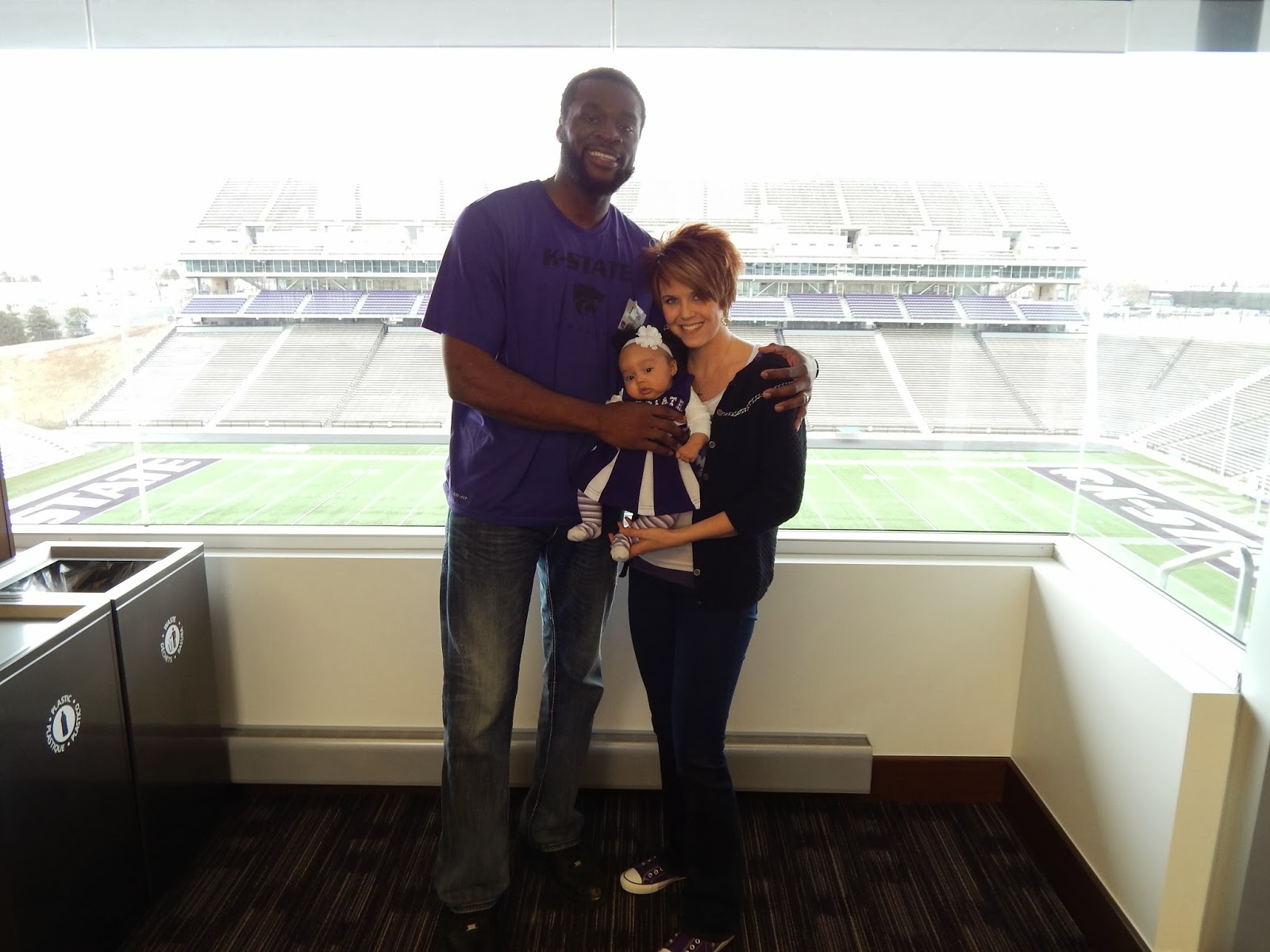 Miss Akinya Kate & her cousin, Marcella.  They were the two cutest AND best-behaved cheerleaders at both the breakfast and basketball game! 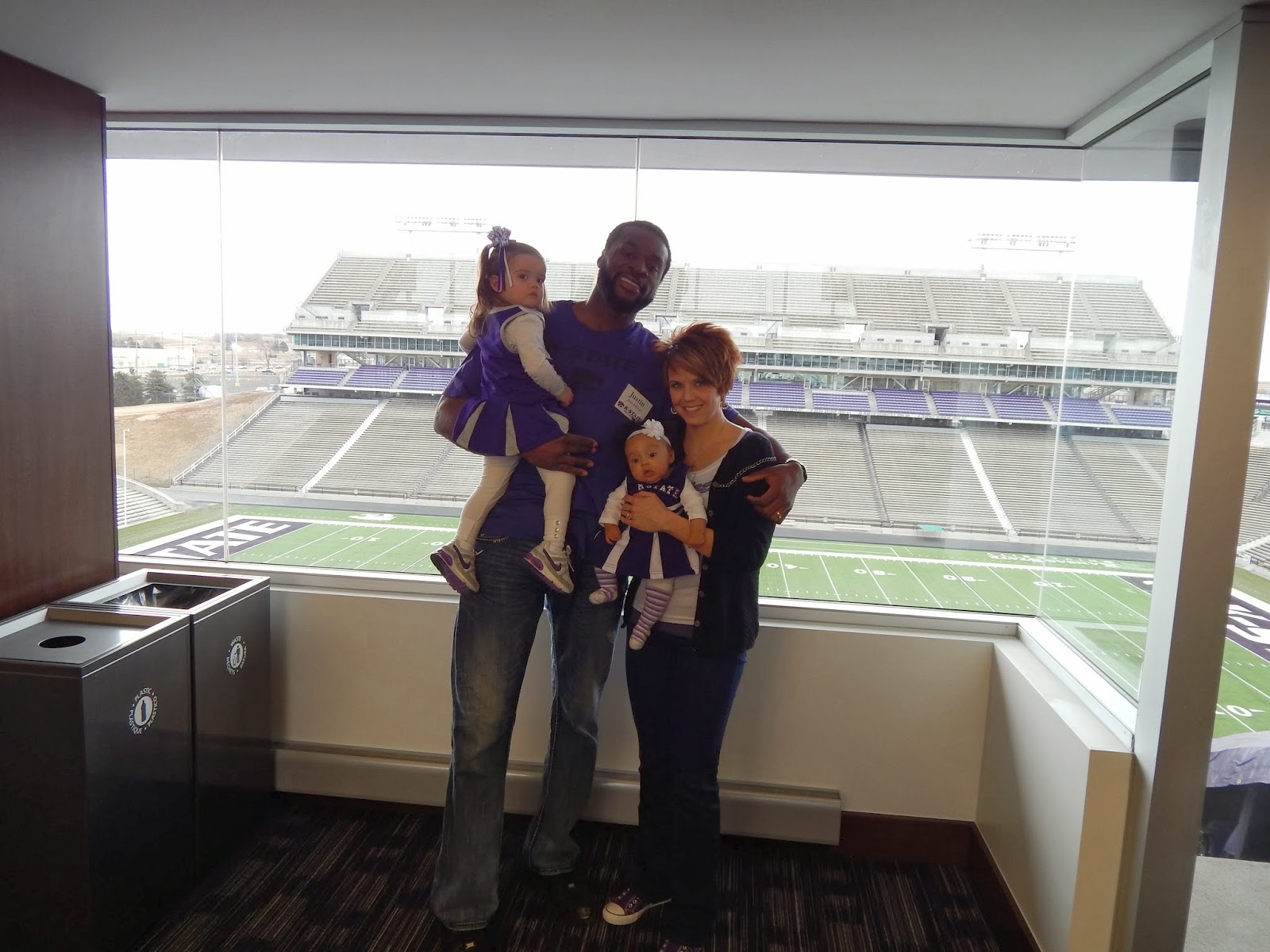 A "K-State Family" picture...we had the privilege of sharing breakfast with the very sociable George Shupe (class of 1968).  And if you know anything about K-State, once you put on the purple, we're all family! 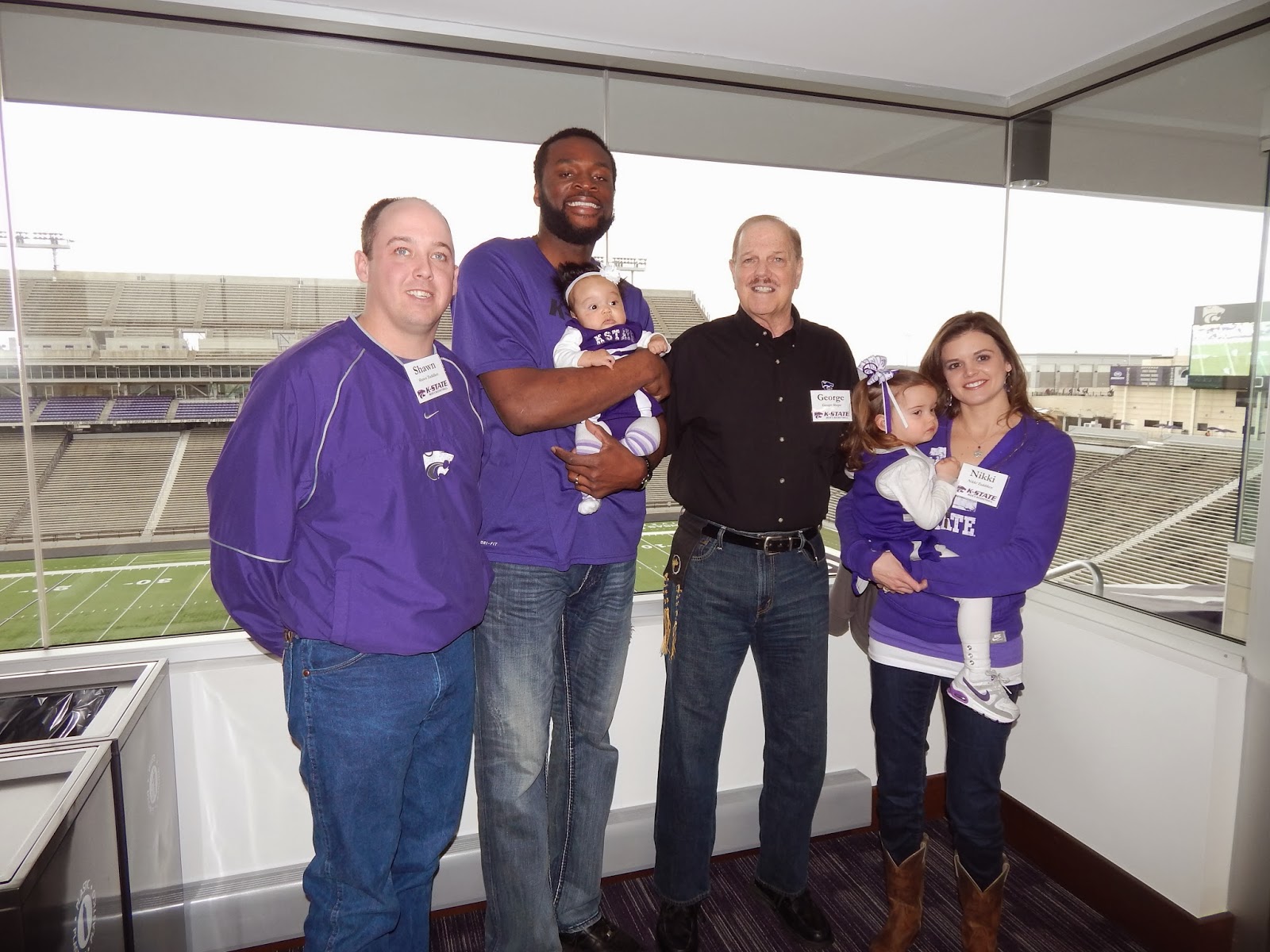 Finally, it was time for the game at Bramlage Coliseum...as we left the West Stadium, the Athletic Department had a 6-passenger Gator waiting to take us to the front door of the coliseum.  Considering how windy and cold it had become, we were more than happy to hop on board and let people think we were someone "important" as we zipped by them!  lol... 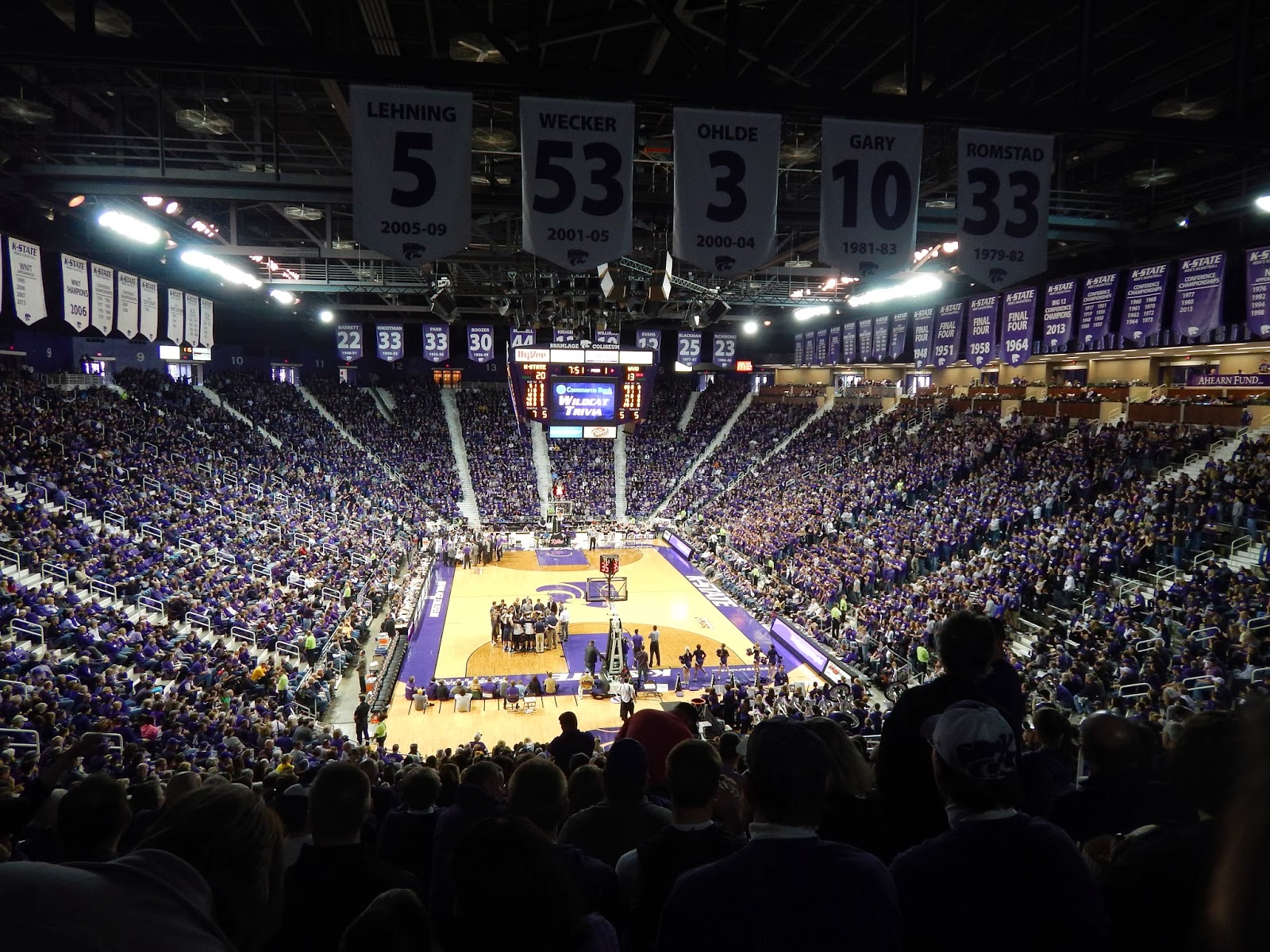 I was actually pretty excited about the game!  We were playing West Virginia--not only did they recently join our conference, but old Bob Huggins had been our head coach just several years ago.  After one season at K-State, he left to accept the WV job...lots of K-Staters had been hurt and angry about his choice, but fast forward to 2014 and I don't think there were any hurt feelings in the room! 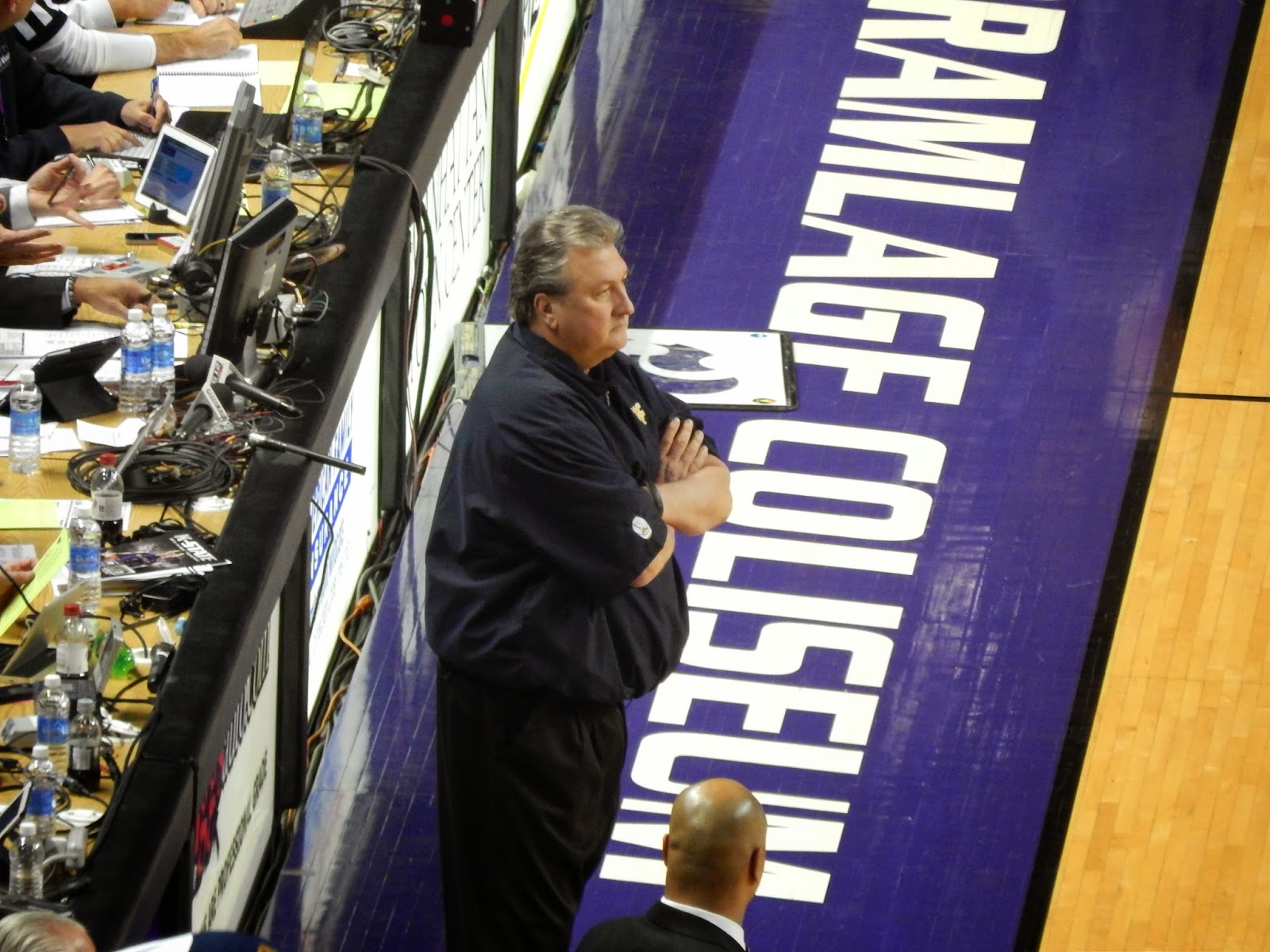 After all, two coaches later and I think we've found something in Bruce Weber! 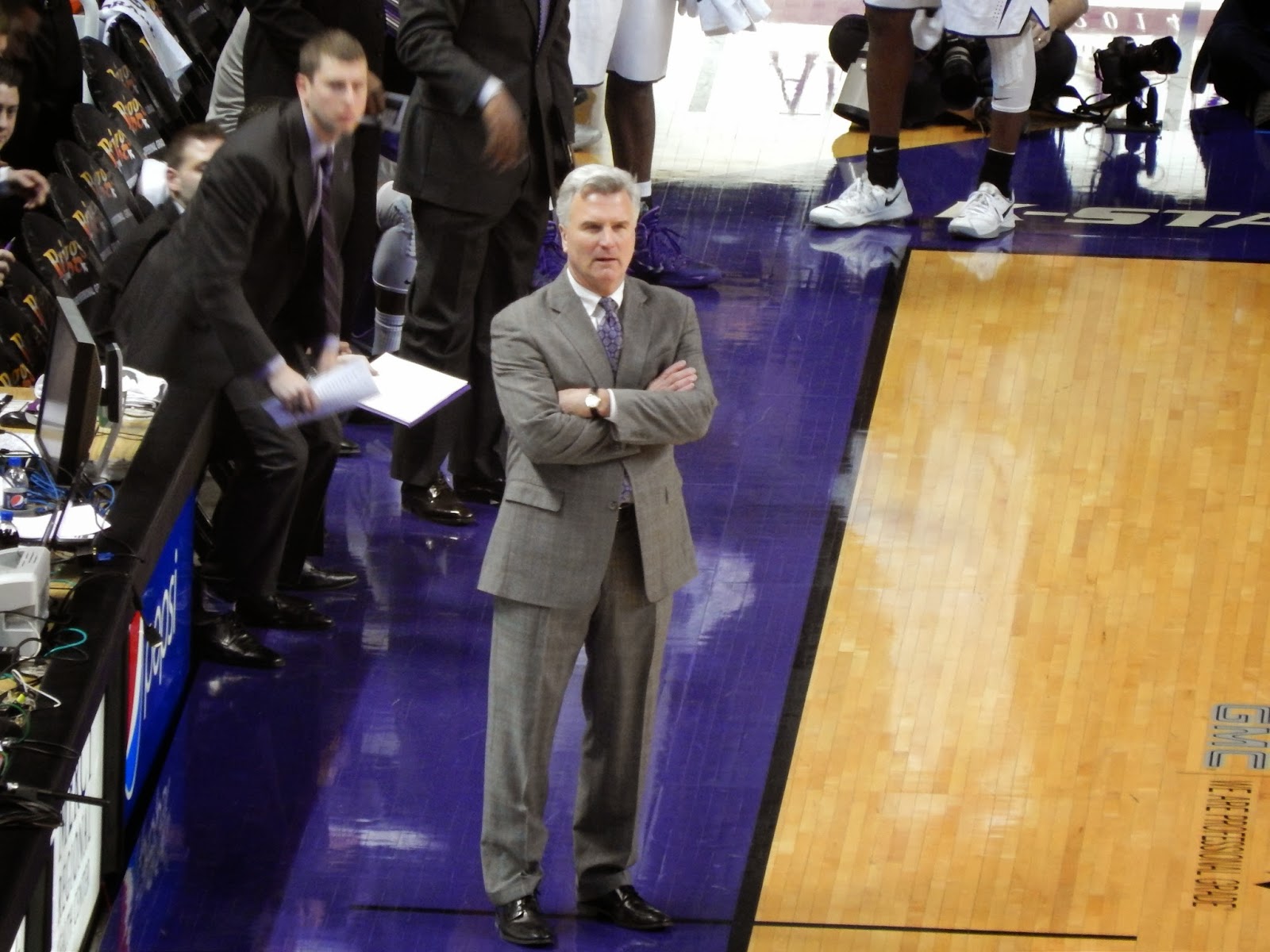 Even though her parents were excited about the game, somebody managed to snooze through the first half! 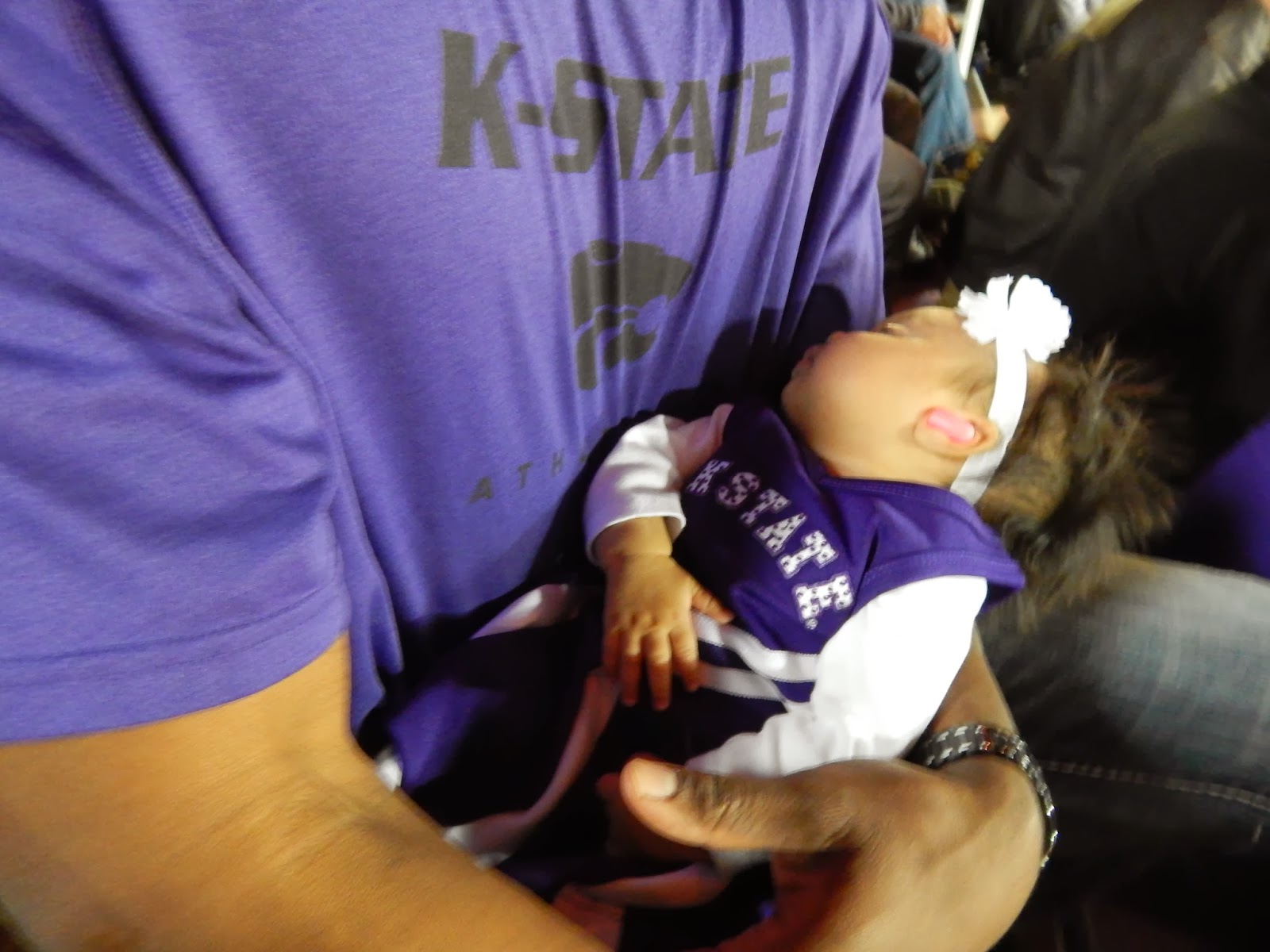 Fortunately, Akinya woke up in time for the recognition ceremony...she waited with the guys (Justin, Schyler Thomas & Kyle Taylor) for the elevator to the tunnel. 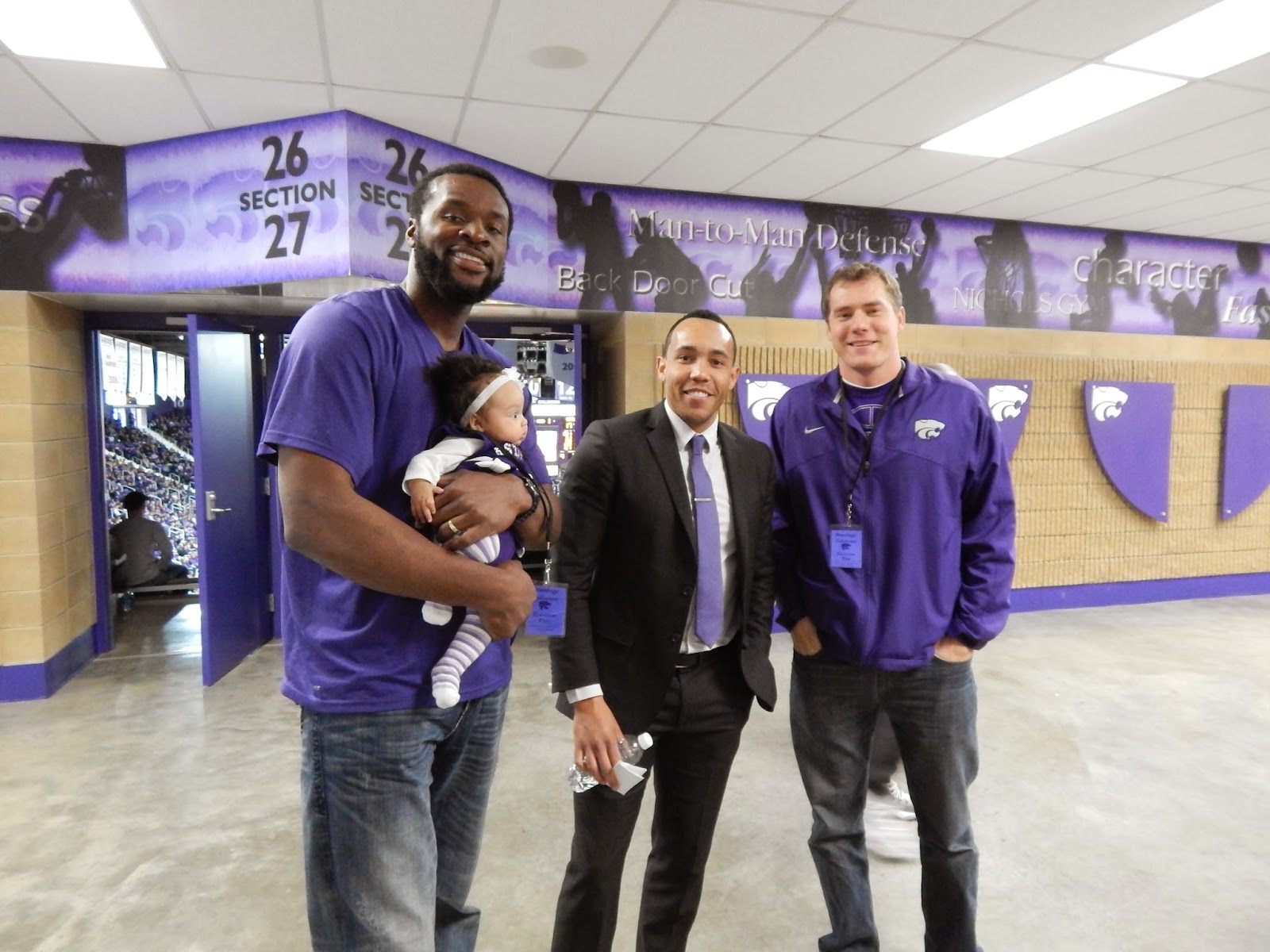 Pretty sure there was a nice 80-year age difference between her and some of the older "Legends"! 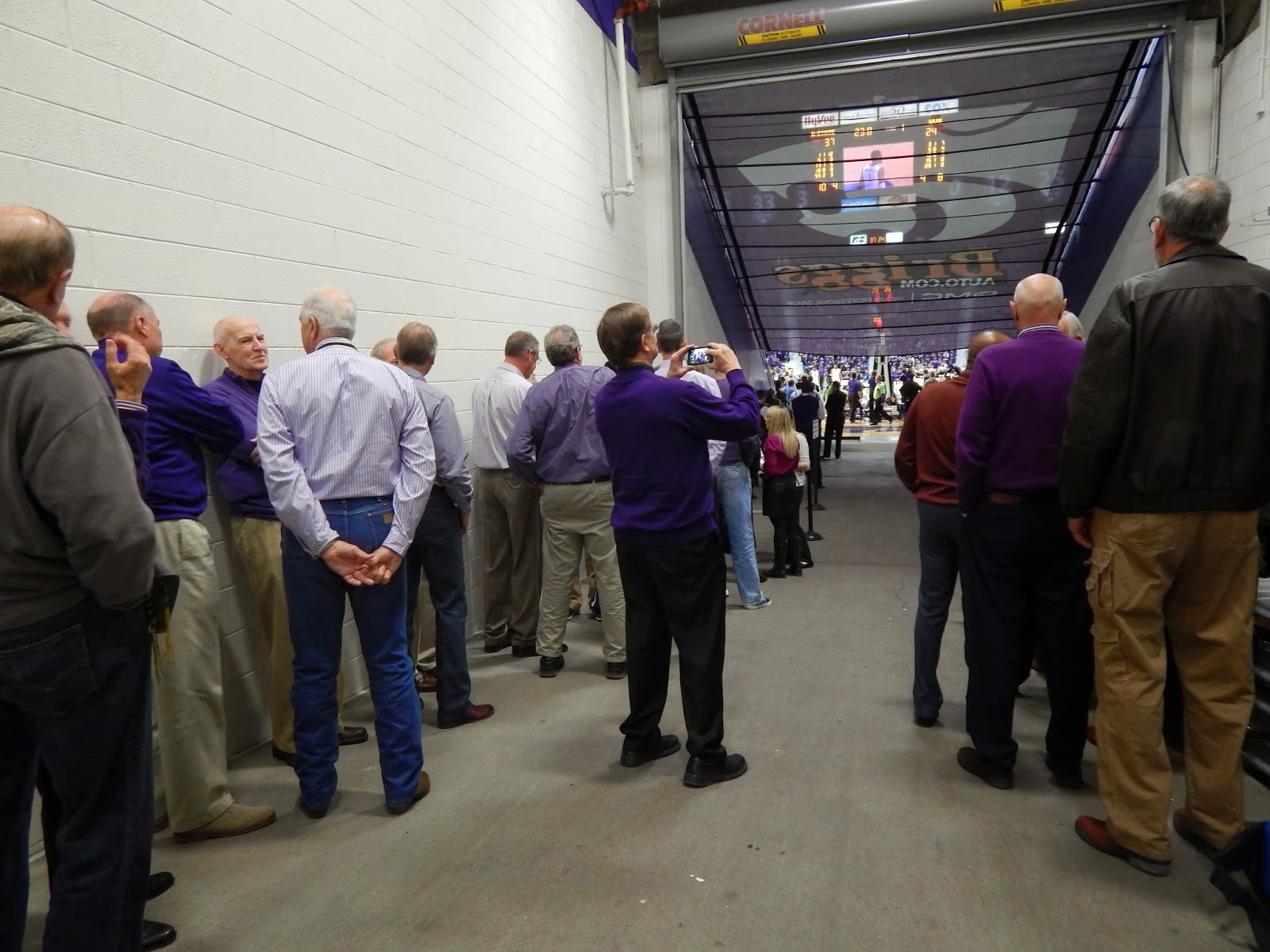 Finally, it was time to go out on the court!  This is the picture of the "Legends" from the 2000's...neat part?  Kyle, Schyler & Justin were teammates.  Discouraging part?  There are 12 years of "2000's"  teammates out there that need to make the trip back for Legends Weekend!  I know Justin would absolutely love getting to spend time with the other guys! 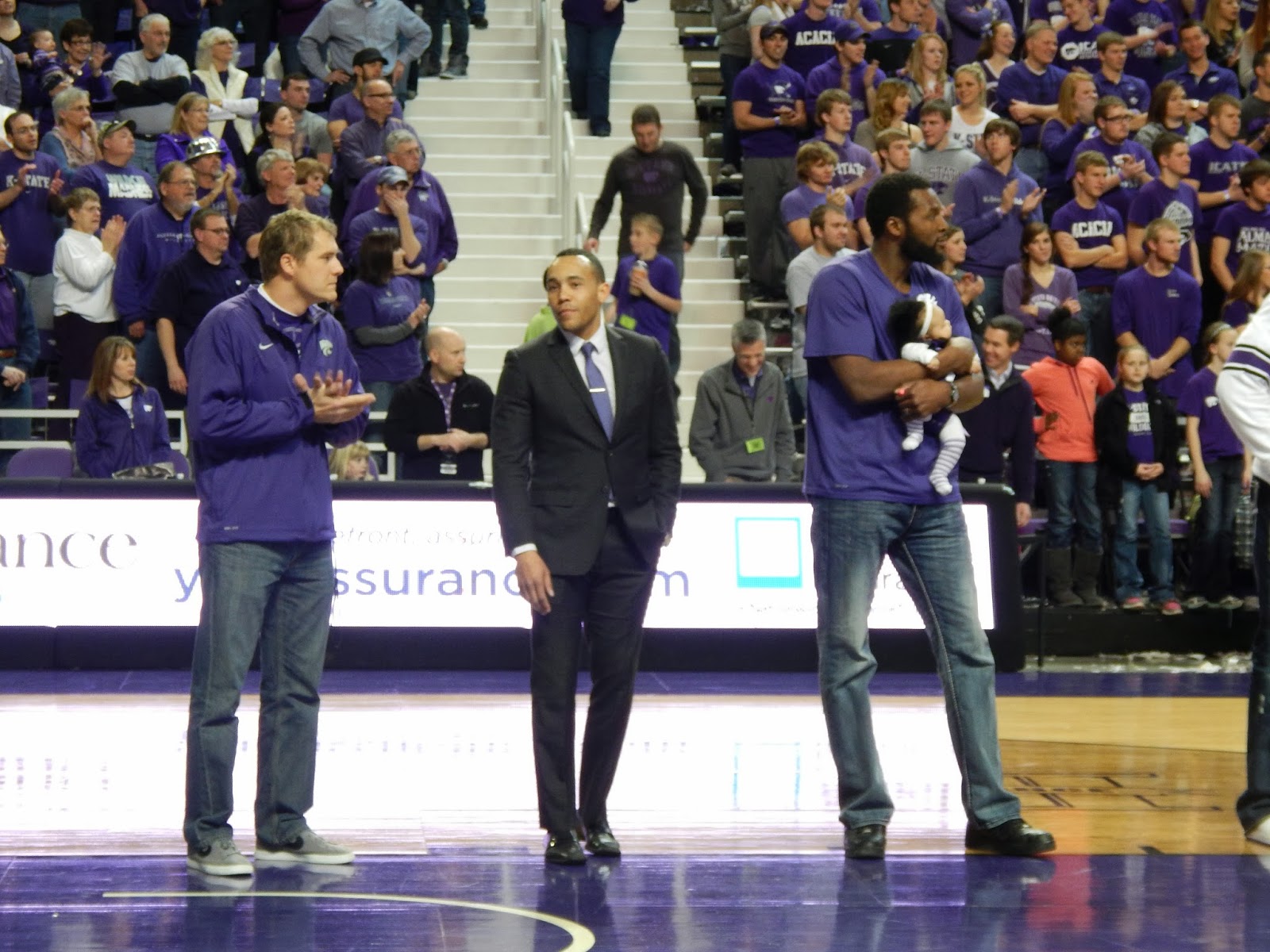 Smiling for the crowd after his name was called! 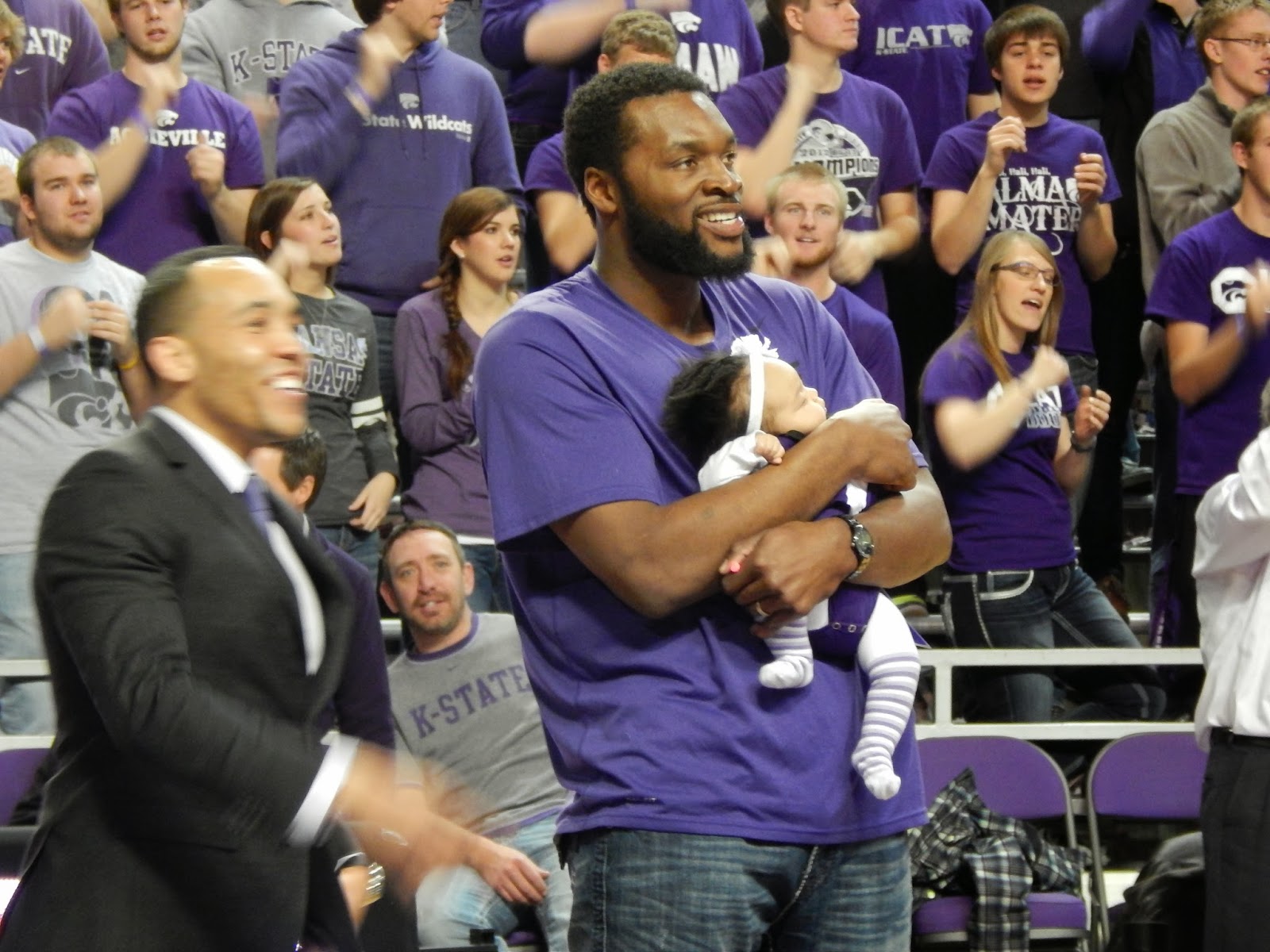 And getting ready to wave "bye" to the crowd! 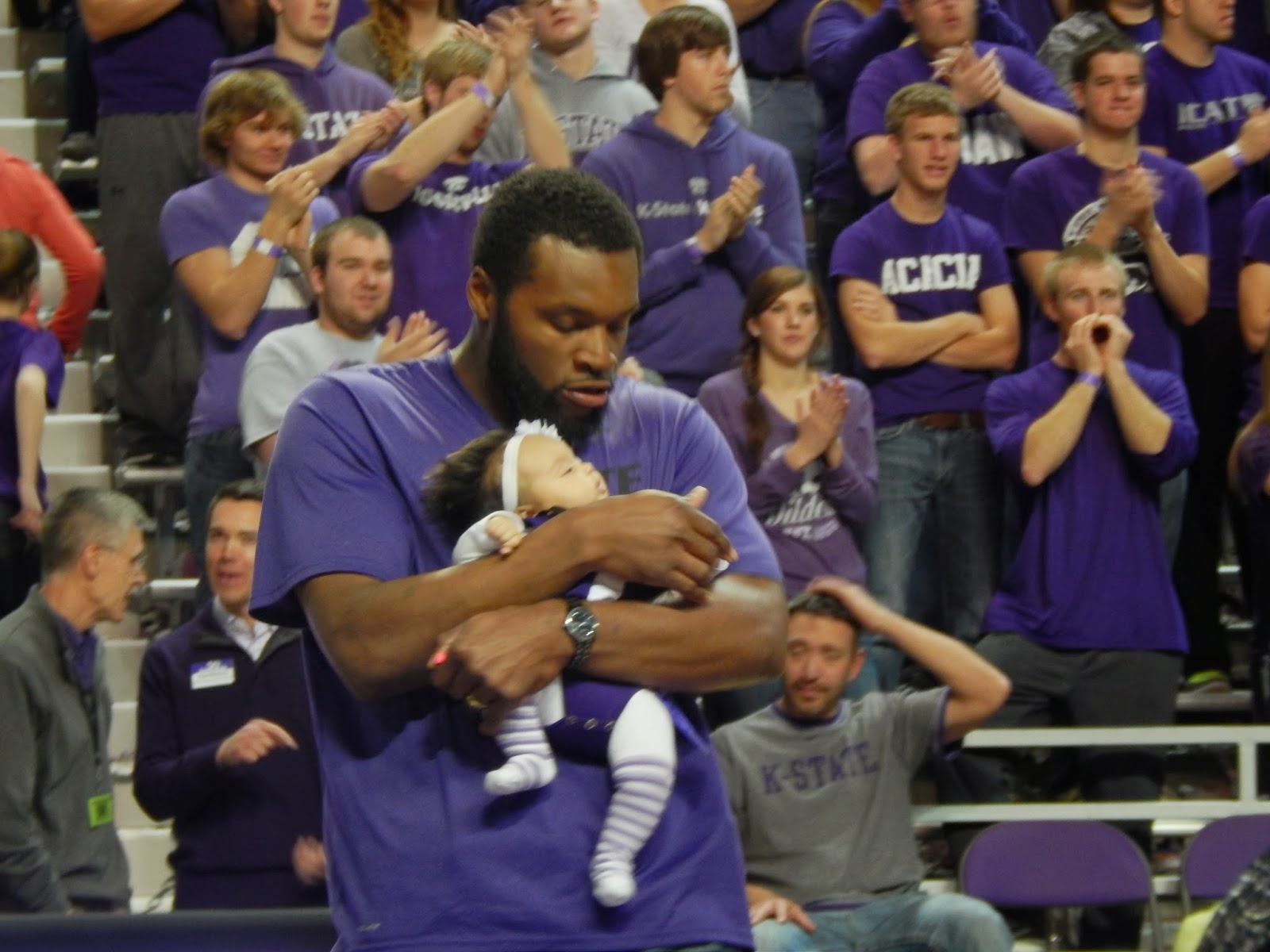 All in all, it was a great day to be a Wildcat!  Akinya did great--she pretty much slept, ate and just took in her surroundings.  It was definitely sensory central--so many new sights, sounds and smells--and I was worried how she would be later that night.   Our evening at home was a happy one and she only woke up once during the night.  Guess she enjoyed her day and getting to celebrate a win over West Virginia!!
Posted by Taddy-Long-Legs & J-Money at Thursday, January 23, 2014 No comments:

Baby on a Budget

I'm back to work.

Thank God.  Because having a baby is not cheap.

That's all there is to it.  But much to my surprise, the two CAN go together!

When we found out we were having a baby, one of my first thoughts was "cha-ching."  I could hear the bank account getting sucked dry!  We knew babies were "expensive," but on top of that, my job is strictly commission.  Until I'm sitting at the closing table, I don't get paid...and in real estate, the average lag time from activity to paycheck is 45-60 days.  We knew to budget for a maternity leave of at least 6 weeks.  Thanks to an emergency c-section, that leave turned into 8 weeks.  Thus, we were automatically looking at a minimum of 4 months without me bringing home any income.  Let me tell ya, that definitely made the "cha-ching" only grow louder! 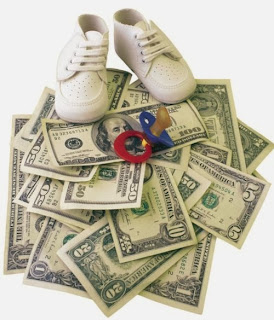 In order to soften the blow once we learned of the pregnancy, we started socking away what money we could--but we also tried to cut as many corners as possible.  Fortunately, no pain came with being cheap...the only pain came when we had to face expenses that just couldn't be found at a reduced rate elsewhere (ie the crazy hospital bills).

I know not all of you are mamas or daddies, so this might not apply.  But if you know someone who's is expanding their family, maybe some of these tips will help them?!  Who knows...but I thought I'd pass some of it on...


CREDIT CARD REWARD POINTS.  We have a credit card that we use for gas, groceries, etc...We discovered we had enough reward points to purchase a new crib and changing table and pay only $40 out of pocket.  Had we waited several more months, we wouldn't have had to pay anything, but it was more important to us that the items arrive while I was still able to help put them together.  Every month, we pay the balance on our card, so I love earning money when purchasing items that we already have to buy!