In my last post, I started in about some of the various projects we have planned for our humble abode.  But we still have one MAJOR project that is underway and completion is about 6 months away--we're expanding our house by 2 feet!

That's right, we will be having a baby on or around October 31st!

As I write this, it's starting to sink in that our life is about to change...we've experienced everything from researching cribs and car seats; to securing a spot on the daycare wait-list; to paying the OB-GYN office for the labor and delivery.  If writing THAT check didn't make it real, then I don't know what WOULD make it real! 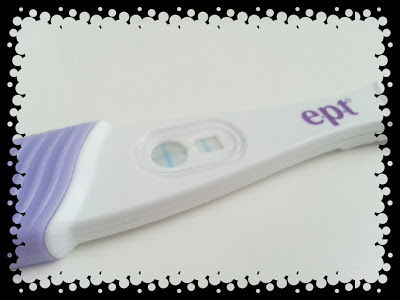 Either my body is great at communicating, or I'm very in tune because right away I had a feeling I was pregnant.  Mother Nature was three days late, my chest felt like it was popping out of my shirts, my stomach was super bloated, I was nauseaus, beyond frickin' exhausted and experiencing dizzy spells.  It was nothing I'd ever experienced before!  Being the medically responsible part of the relationship, Justin stopped by the store and picked up a home pregnancy test.  Over the weekend, we had two positive results...Justin was so excited that he was about to hyperventilate and I was so shocked that I sat in our hallway sobbing my eyes out.  I'm a planner, dammit, and this was NOT part of my plan (especially, my business plan) for 2013...or 2014...or...for at least a FEW more years.  But as they say, there's no "good" time to have a baby, so it was time to put my big girl pants on and stop being a control freak--life was, literally, happening whether we were ready or not!

The day of my freak out--4 weeks pregnant.  Holy.  Schnikes. 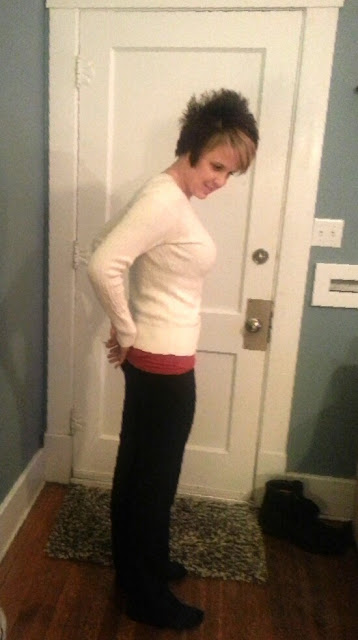 Swung by the doctor's for the bloodwork and they confirmed I was 4.5 weeks along and due on Halloween! 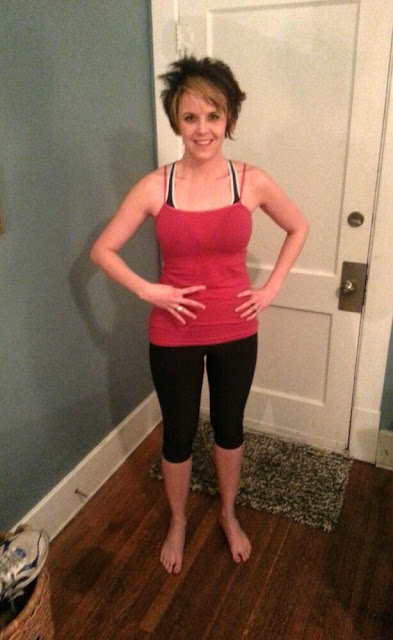 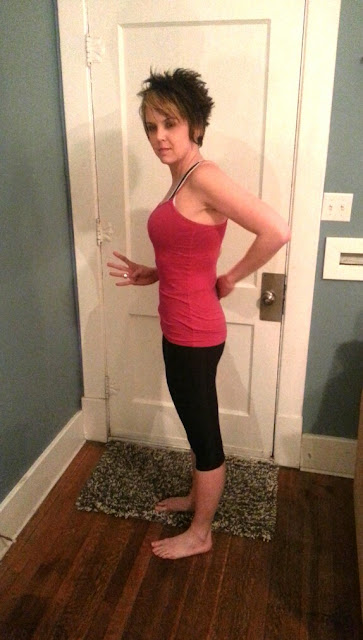 By the time I was 6 weeks pregnant, the symptoms had been full-blown for quite some time.  The bloating was becoming more pronounced.  Round-the-clock "morning" sickness--all day, all night, and even if I tried to sit still and move to grab something...holy moly, just moving was awful.  On top of it all, work had really picked up and I was working 12-hr days, 6 days a week plus who knew how many hours each Sunday.  I hated every waking minute.  All I wanted to do was crawl in bed and NOT move.  Between already having the pregnancy exhaustion and battling through long days at work, I was beat.  And it was starting to show.  Numerous people commented on how tired and spaced out I looked...if only they knew what was going on! 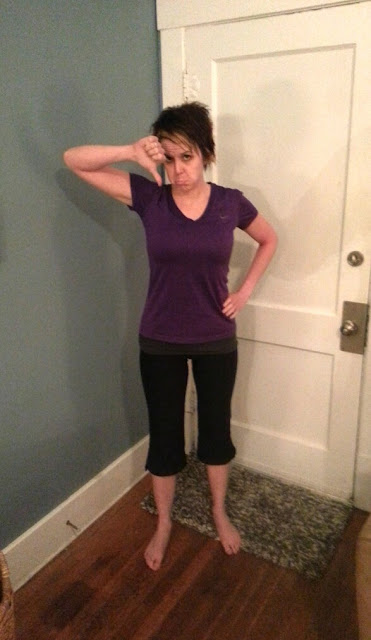 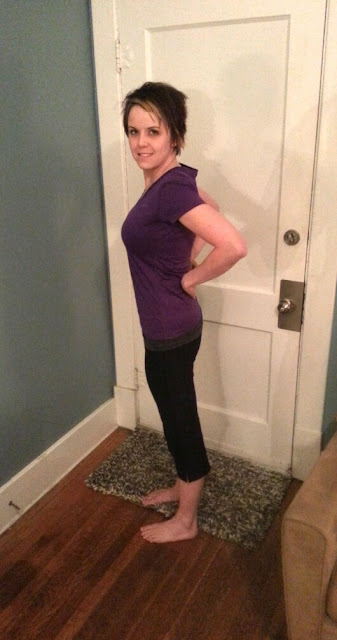 Week 7 the bottom of half of my face was starting to get puffy.  Helloooooooo, hormones!And I had 7 months left to swell up!  Eeekkk! 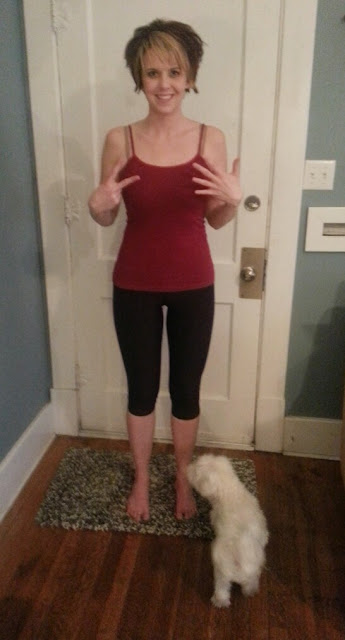 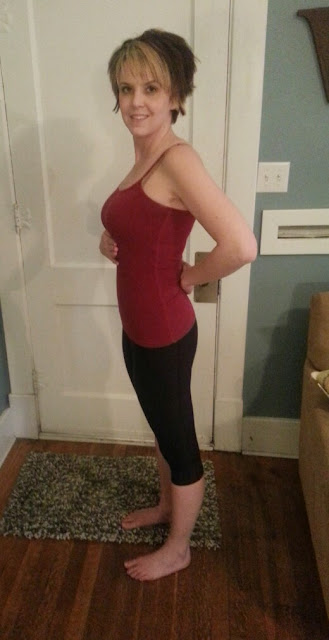 Oh--do you see the roundness starting to develop?!  Told ya I was bloated!

By the time I hit week 8.5, I was starting to "feel" pregnant.  No matter how hard I tried, I couldn't suck "it in" anymore and my pants were becoming tight in the waist.  Wait, I shouldn't call it my waist.  I should say my rectangle!  I felt like I still had a waist from the front but if I turned sideways, I had just become one big, thick rectangle...yay for more bloating! 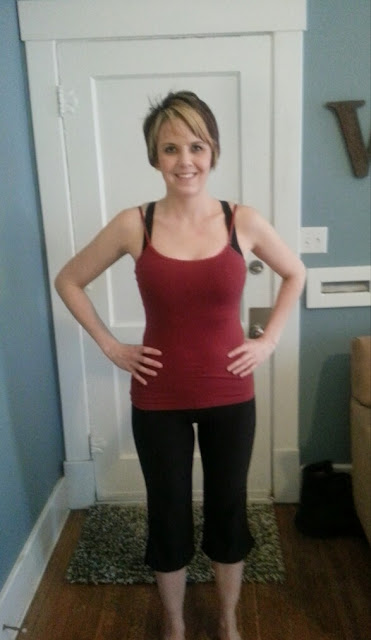 Week 10 saw some improvement...during Holy Week, I actually felt pretty darn good.  I was able to eat a few things here and there and I didn't feel like I was going to lose my stomach every time I moved.  Halleliuah!

But the best part of week 10?  We finally announced to our family at Easter Dinner that we were having a baby!  I think it's safe to say that my family was pretty shocked!  But excited, too! Unfortunately, we had to make the announcement over the phone to Justin's side of the family but I would say they were equally excited!!! 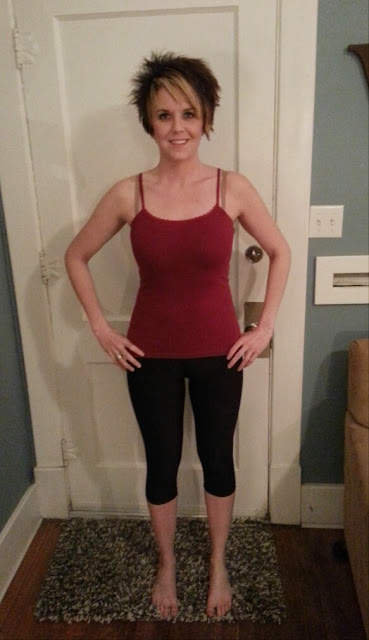 Week 11--even though the scheduling was a week behind, it was time for our "10-week" doctor appointment.  They did lab work, provided me with information that would have been super helpful back at Week 4 (don't even get me started on that rant), and paid the bill for the labor and delivery.  The commission check that I received the day before and that I worked 4 months for?  Goodbye!!!  All I can say is that this kid isn't even here yet and it's costing us an arm and a leg!

The other surprise?  The nausea was back--and with avengence.  It was limited to mostly the first part of the day, but for what it lacked in duration, it made up for in intensity.  I was now unable to keep food down and after a series of unfortunate events, my primary care physician had NO problem setting me up with a  prescription intervention...and so far, the meds are working!

Just a week later, we had our Week 12 appointment where we heard the heartbeat...talk about CRAZY!  Not only could we hear the heartbeat, but we could hear the baby moving around...INSANE!!!  And to think all of that's happening inside of me--even more bizarre!

And here we are, just under Week 14.  My pants really don't fit anymore.  Thankfully, my order of Gap-sale maternity pants just arrived!  They're still a little loose in the waist, but they're sooooo much more comfortable than wearing jeans with rubberbands or safety pins keeping my tab-waist dress pants in tact.  Oh, and should I mention they make using the bathroom SO much more convenient?!
I have to admit, it's been a rough first trimester.  In addition to the awful sickness, I've battled two sinus infections just 5-weeks apart, an ear infection AND a head cold. To say I've been miserable has been an understatement.  With all that, my weight gain has been ZERO pounds and I've been forcing myself to eat just so I don't end up LOSING weight.  For someone who's always LOVED to eat, it's been a bit of a change!  But guess what?  I keep hearing that the second trimester is "the best" trimester and I sure hope all the other mommas are right!


It's crazy to think that we've known about the pregnancy for nearly 2.5 months now--and time has absolutely flown by!  In just about six weeks, we'll find out if we're having a boy or a girl...and then just four months later, our house will truly be expanded by two feet.  Eeeeek!!!!
Posted by Taddy-Long-Legs & J-Money at Sunday, April 28, 2013 1 comment: