Where has the month gone?!  According to my computer, it's already March 22 and the NCAA basketball tournament is well underway...and the rest of life keeps moving right along!  If you ask me, it should still be early February.  Heck, the weather feels like it should still be early February.  I'm not sure what was done to upset Mother Nature, but I'm ready for a bit of her forgiveness!

In our house, basketball reigns.  We do the football thing, but basketball is what the husband and I get REALLY excited about!  K-State has had a great season, even with the hiring of a new coach.  During the regular season, we tied with KU for the Big 12 Championship title--but the real challenge was still ahead.  We had to play them last weekend during the conference tournament!  We already lost to them two times this season, so the third time around, we really needed to turn it around!  Even my super-sweet and highly-intelligent niece thought so... 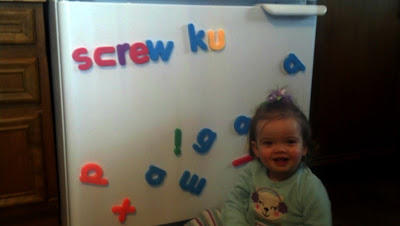 If only Marcella knew how proud her auntie was of her niece's spelling abilities! ;-)  As a segway, I have to say--that little girl is really growing up!  During the month of February, there were a few evening basketball games that her parents attended, so we eagerly let her come to our house.  She would dig through her basket of toys, grab a book and then crawl up in the armchair to read with her auntie...so sweet!  I can't say enough how much that little girl melts my heart!  And if she ever goes missing, no need to put her picture on a milk carton--just come check her auntie's house!

As the basketball games progress, March continues to be a busy month at our house.  Work has exploded--during the first of the month, I brought on four new listings and three of them sold in less than 5 days!  Buyers started coming out of the woodwork and I've had meetings, meetings, meetings landing all over my calendar.  Add to that, I was in Wichita for 3 days (but on two separate occasions) within just 6 days.  I've literally met myself coming and going!  But when you're balancing 8 listings and have 7 properties under contract, that's just the way it is!

We are starting to plan some summer renovations for the house.  We HAVE to paint the exterior.  Our house has the original wood siding, so everything will need scraped and then covered with at least 2 coats...including the porch rails, beadboard eaves and exposed rafters...cha-ching, cha-ching!  Needless to say, it won't get done if we do it, so it's getting hired out!  We're also toying with the idea of changing up the color--the khaki looks just fine but with a brown fence and brown roof, it's a little too "safe" for my liking.  I have some color schemes in mind, but we'll have to see if the samples look the same in real-life as they do on the computer screen!

Last year at this time, we dug up our shade garden for the backyard, planted some Russian Sage off of the back porch and started some honeysuckle along our fence line...I was SO excited--our landscaping was DONE!  But now, the wheels are turning again!

We have this spot in our front yard that has tons of potential...This picture was taken after the fence was installed, but before the planks were stained and any landscaping was put in around the porch... 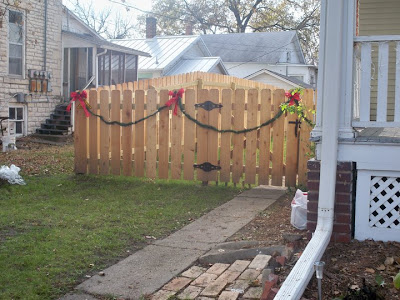 And this picture was taken around the same time, too...but the thing is this--we now have landscaping in front of the porch and all along the long portion of the fence, all the way to the alley.  But the little square of grass to the left of the porch has one big tree smack-dab in the middle and nothing else...and it's kind of a pain in the rear to mow! 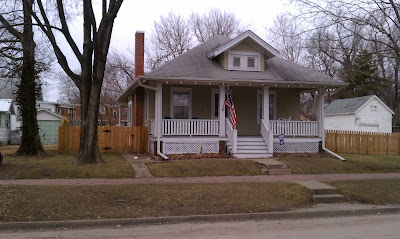 And when everything is in season, the landscaping is nice and tall!  And since we added a bunch of hydrangeas to the beds this fall, we'll really have some nice height and body in the thinner areas! 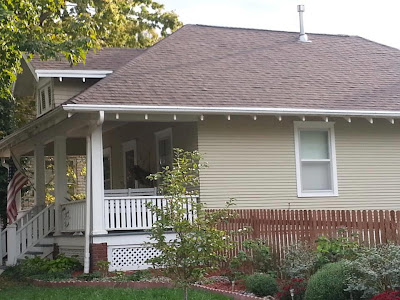 But that brings me back to the patch of grass on the left side of the porch.   You have all this volume in the front and on the north side of the house...but nothing on the left side.  So far, I've lived with it because it's also where our property line to the neighbor begins.  When we re-seeded the lawn this fall, we moved the birdbath to this little area so the new grass wouldn't be harmed...and I've since decided I kind of like having the bird bath tucked between our tree and the neighbor's tree!  But naturally, it needs some more plants around it to make it really belong there, right?!

If so, I'll have to find some plants that will work in shade, but also tie into many of the sun-loving plants in the north section of the flowerbeds...and I'll need a ground-cover for the area where the gate swings open.  Whatever we plant will also have to be fairly drough-tolerant as the big old tree roots use up any moisture that area gets.  And then I become overwhelmed :-)  I have this great mental picture of what I want it to look like, but I don't know my plants well enough to execute it...grrrrrr!  I'm seriously tempted to do one of two things.  1--give my mom our debit card and let her tackle the project...or 2--call one of the local landscaping companies and have them create a design.

I have to say, I love letting my creative juices flow...but I HATE when they run out...or just plain refuse to flow!  lol...The good news is that Spring is just beginning (or, so they say) and we have plenty of time to landscape that little patch of land, paint the house and take on our other renovations!
Posted by Taddy-Long-Legs & J-Money at Friday, March 22, 2013