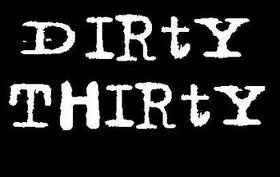 I have officially been initiated into the Dirty Thirty club!  Almost two weeks ago, I hit the big 3-0...it seemed that many people expected me to experience a mid-life crisis when that birthday hit.  But I have to say, so far--so good.  No mid-life crisis...just yet!  Unless you count investing in massive amounts of anti-wrinkle eye cream and anti-cellulite cream...but that started a year ago ;-)  Prevention, baby.  Prevention.

It was quite an exciting birthday week, to say the least!  On the actual night of the big 3-0, Justin and I went to the KSU v. North Dakota Men's Basketball game.  As you can see, there was hardly a crowd...and our new coach is not nearly as entertaining to watch as Frank Martin was.  To be honest, it wasn't as exhilarating as other games we've been to, but it was nice to have some time together and watch the Cats play ball! 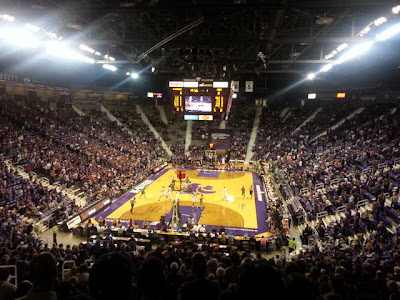 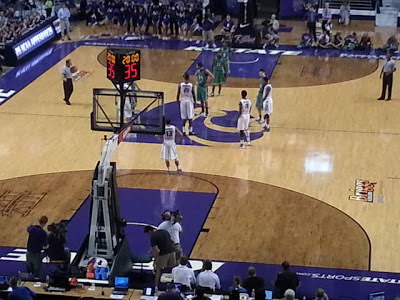 Earlier that day, we made purchased a significant birthday gift...well, sort of.  We swapped Justin's commuter car for another truck.  Why, you ask?

Well......things with the railroad weren't what we expected them to be.  When Justin first started, he commuted 1-hour each way and had an excellent Foreman.  Two weeks later, the Foreman accepted a position in another yard, so there was a major change in leadership.  And when I say major, it was like a night-and-day difference.  Justin tried his best to bite his tongue and wait it out until he could transfer to another yard.  But in the meantime, his yard was relocated and he had the option of commuting 3 hours every day, or living in a hotel all week long.  Some days, he commuted and worked 12-14 hours days.  If he didn't have anything that had to be dealt with back at home, he'd book a hotel somewhere and stay there all week.  In the meantime, he struggled with the new leadership.  With each passing day, he became more and more upset.  Lo and behold, just two days before his new-employee probation period ended, it became clear that the railroad was not meant to be.  Justin called his old boss at Asplundh and was enthusiastically returned back to his Foreman position.  I have to admit, I was a bit freaked out.  And in tears.  There was so much potential with the railroad and the benefits are amazing (if you can stick with it)...but I just had to trust that the good Lord knew what he was doing by keeping a position open for Justin at Asplundh.  Because, really, who am I kidding?  If Justin left Union Pacific to find himself unemployed, I would have had a very, very hard time understanding Jesus' sense of humor.  The last thing I would be okay with is a stay-at-home husband because, well, that means I wouldn't get anything done at work.  You see, Justin doesn't entertain himself very well when he's at home.  Every 30 minutes, he's calling..."I'm bored...what are you doing?  Oh, you're working?  Well, guess what just happened in this movie I'm watching?!  It was the craziest thing ever!"  Blah, blah, blah...Love him to death, but he can't be a stay-at-home husband :-)

That said, there was no need for the commuter.  Ironically enough, a local dealership had the exact truck that Justin had been looking for earlier this Summer.  We were able to swap out his itty-bitty Hyuandi and he brought home his new manly, beastly truck!  To be honest, I was really worried about how Justin would handle the realization that something he wanted so badly, and for so long, wasn't meant to be.  But you know what?  He's happier than I have seen him in a loooooooooong time.  He looks forward to going to work, he's happy (but still tired!) when he gets off work and he can step-up his freelance tree business again! 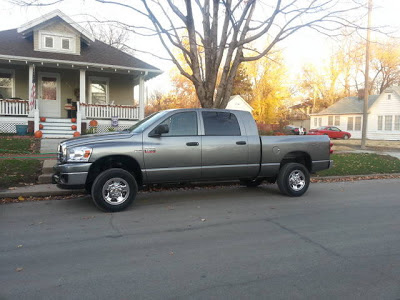 But back to the story...so, my 30 birthday was off to a good start.  No mid-life crisis, a basketball game, Justin was home (which, is a big deal considering he's been gone in years past) to celebrate, things were going really well.

The part that I was really looking forward to, though? Some time with my girls!  The night after my birthday, it was Girls' Night and we all met up at our local Jamaican joint for dinner, then we crashed Jennifer's place to watch the K-State football game and have a drink...or two!

The following weekend, was even MORE girl time!  I'm telling ya, I go for what seems like forever without seeing my friends, then it all comes at once--I love it! This time around, I was able to celebrate with my college roommate! Jill and I lived together during our Sophomore year at Creighton, then we were going to live together again our Junior year--but then I decided to transfer to K-State and ruined the plan.  In the past 11 years, we've pounded the pavement from Manhattan to Omaha to make sure we get to see each other.  In my opinion, we don't see near enough of one another but with work, family, etc it just gets chaotic at times!

Anyhow, we managed to find a weekend that we were BOTH available!  Nov 17, 2012...and yes, we had to start planning waaaaaay back in July.  See, I told you it's difficult to get together!  Jill was going to be in Kansas City for a race and I didn't have any commitments.  Thus, it was deemed "Girls' Weekend" and we would celebrate our 30th birthdays together!

The big weekend was finally here.  We both pulled into Kansas City just before bedtime on Friday night.  After a long week at work, we both crashed.  The next morning we got up and went shopping with Jill's sister, Megan, and a former co-worker of Jill's, also named Jill.  It was great to see all the ladies and catch up!  Another gal joined us for the day of shopping, a movie and a steak dinner at the Hereford House....yum!

The next morning we were up bright and early so that the girls could run their race!  Jill, Jill Deuce and Megan decided to run the 5k due to some recent injuries...and Katie ran the half-marathon.  And what did I do?  I stood on the sidelines and cheered them on!  It was the PERFECT way to experience a race and celebrate my Dirty Thirty :-) 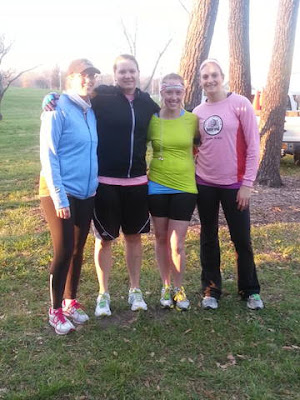