A Cat and His Lasagna

Our indoor/outdoor cat, Malcolm, has been a strictly indoor cat since he initiated the Flea Fiasco of Fall 2010.

He survived being cooped up all winterlong...but as soon as the weather started to warm he had a change of heart and was itching to get outdoors.  They say animals have a way of letting you know when they're upset--and it's certainly true of Malcolm.  In just one week, he managed to chew through our laptop cord and my cell phone charger...both while plugged in.

As we "adopted" Malcolm, we're not sure of his true birthdate.  However, it would be somewhere around late March/early April.  As he managed to live to see his 3rd Birthday after chewing through the cords, we decided to get him something to occupy his mind.

I'm convinced cats are nearly impossible to train.  And by age 3, cats are supposed to outgrow the cord chewing thing--not START it.  It's easier to keep him entertained and mentally stimulated.  Trouble is, Malc doesn't like the typical cat toys.  The only thing he really likes to do is bat around clumps of dried mud from Justin's boots...otherwise, he just eats and sleeps all day.  We are hoping we have found the solution to the cord chewing problem: K-Mart had their bird baths on sale for 40% off this week. 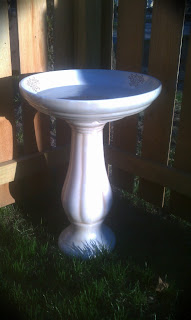 In all reality, the bird bath may be pure torture.  It's placed in the corner of the yard where Malcolm can see it from both the living room and dining room.  Hopefully, hopefully, hopefully--between napping and eating, he will find some kind of mental stimulation from watching the birds.  And hopefully he'll stop eating our cords.

And on a random note--we've been lauging about how Malcolm is turning into Garfield in his old age...Sleep, eat and do it all over again.  Garfield was a huge fan of lasagna and at lunch today, I was telling my mom and sister-in-law about the best ever lasagna recipe.  It's made in a slow cooker of all things and it's meatless--however, it is so hearty that you won't even notice.  I better hope Justin doesn't read this as he thought the lasagna DID have ground beef in it!  The recipe may sound a bit different than your traditional lasagna recipe, but give it a try--you'll be glad you did :-)

Use a 4 quart slow cooker. Put a spoonful of pasta sauce (about 1/4 cup) into the bottom of your cooker and swirl it around. Add a layer of uncooked lasagna noodles (you're going to have to break them to make a layer). Smear ricotta cheese and pesto onto the noodles. Add a handful or two of baby spinach, and top with a layer of Parmesan and slice mozzarella cheeses. Repeat layers until you've run out of ingredients. The spinach is fluffy, so you're going to have to squish it down to make it all fit.

Before closing the pot, put 1/4 cup of water into the empty pasta sauce jar and close and shake. Pour this saucy water over the top of everything.


Now cover up and cook on low for 6 hours, or on high for about 3 to 4. You'll know it's done when the top layer begins to brown and the cheese is melted and bubbly. It will also pull a bit away from the sides. Taste-test a noodle to check texture.