I had the best intentions, but I didn't get a week 18 picture...oooops!  Last week ended up being just a 3-day work week and it made for some CRAZY days with work ending anywhere from 9:00-10:00 at night.  We had so much other stuff going on that it totally slipped my mind!
But this week, I made sure to get a week 19 picture.  It's crazy to think in just one week, we'll find out whether we're having a son or a daughter!  My "beer gut" continues to grow but it still looks like just that--and not like there's a kid growing there.  As Justin says, it'd be nice if I looked pregnant when we go in for the gender sonogram, but we'll see if that happens!


One of last week's highlights was making a roadtrip up to Omaha.  One of my most favorite people from my days at Creighton was getting married and we were going to make a long weekend out of his wedding celebration.  Last time I was up there was 3 years ago and it wasn't to play, so I was really looking forward to the trip!
We left bright and early on Friday morning so we could get to the famed Henry Doorly Zoo when the doors opened...glad we did because that place was already PACKED!  It had been 10 or 11 years since I had last been there and I barely recognized the place.  Justin's never been IN Omaha, so for him, the zoo was quite experience!  How did I know he was excited?  At each and every exhibit he had to take pictures (and then show them to me)...here's a quick shot of him checking his phone to make sure the picture turned out okay! 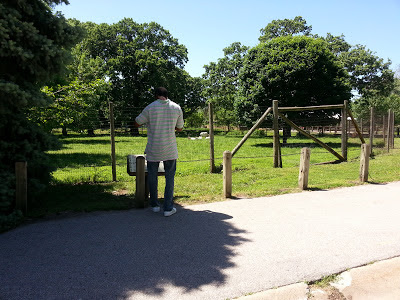 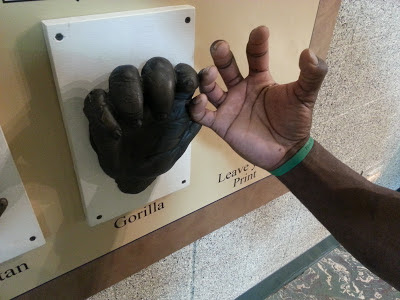 See the size of his hand compared to a gorilla's?!  And to think--I'm supposed to birth his child?!  You best believe this mama will be asking for an epidural!
Once we got done at the zoo, we decided to find somewhere to eat.  In Omaha, this is no easy task--rumor has it that they have the highest number of restaurants per capita, so deciding on ONE place can be difficult!  Since the Creighton campus wasn't too far from the zoo, I decided to take Justin on a vehicular tour so that he could see where I spent my first two years of college.  I could have easily parked the car and wandered around on foot for several hours but before too long, Justin was getting whiny and irritable--SOMEBODY needed food!
Then, it dawned on me--Cali Taco!  Being just a few blocks from campus, it was a frequent place for us Creighton kids to go...good food AND it's cheap.  We pulled up to the intersection and once Justin saw the word "taco," he refused to go in.  He was in the mood for something "hearty" and "a taco just wasn't going to cut it."

Being the nice wife I am, I ignored him :-)  I made him go in and once he saw everyone else's fried "California" taco, his attitude started to change...then his food came...and then he saw the clip from when it was featured on Diners, Drive-Ins and Dives.  Now, he can't wait to go back!  To say he loved the food (and left full) is an understatement :-) 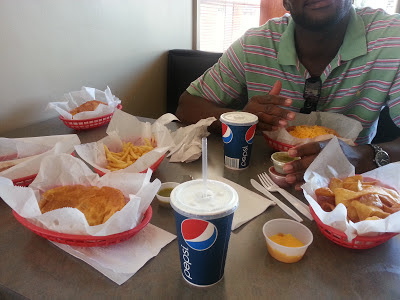 The next day, we were up bright and early for a 10:30 am wedding on campus.  Yes, a morning wedding.  First morning wedding that I'd ever been to!  The couple got married at St. John's Cathedral and had other weddings to contend with that day, so they took what they could get.
The church is a gorgeous building and sits right in the middle of campus...this picture is EXACTLY how I remember it.  Lit up and glowing at night! 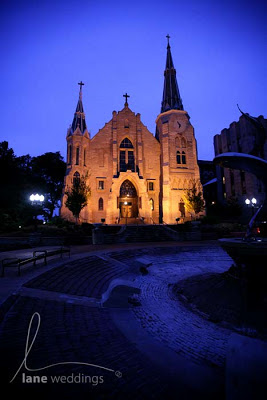 But this is what it looks like during the day.  Absolutely gorgeous.  Guess that's one of the perks of attending a Jesuit (Catholic) university--they sure know how to build a pretty church PLUS you get to walk past it every day! 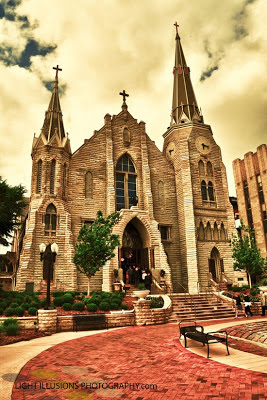 And the inside...it literally just takes your breath away! 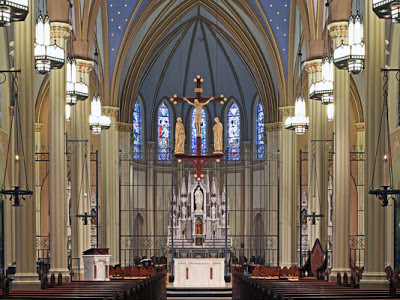 After the ceremony, we headed downtown for a brunch reception at the Magnolia Hotel.  In my opinion, this place is the epitome of a "hotel reception".  The exterior facade was gorgeous... 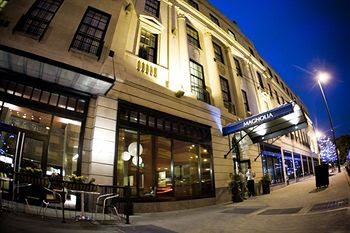 The hallway where they set-up the brunch buffet was stunning... 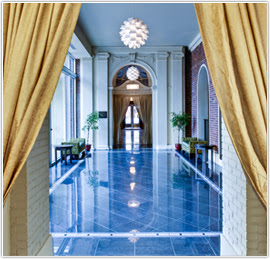 And the courtyard dining area was breathtaking.  But there was one small glitch--it started to rain as the ceremony ended so all the tables and décor were moved indoors.  It didn't matter--as they say, rain on your wedding day is good luck! 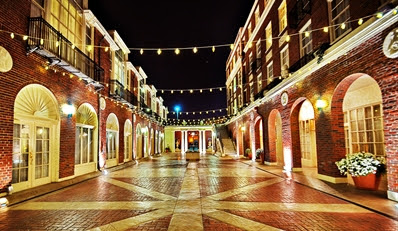 Later that evening, all of us met up in the Old Market for sushi and drinks.  Well, most of us, at least!  Even though the bartender offered me the alcohol menu and one of the guys from the wedding party tried to get me to take shots (apparently, neither one had a clue there's a baby brewing in me), I sipped on a Shirley Temple and let everyone else enjoy their adult beverage! 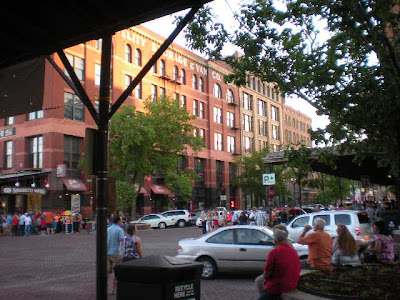 Finally, it was time to head home.  In the world of real estate, it's guaranteed that all h-e-double-hockey sticks will break loose when you leave town and the guarantee held up while we were on the road.  We had a super hearty breakfast on Sunday morning, then hit the road back home.

Needless to say, I certainly wasn't looking forward to coming home to everything...between Monday & Tuesday, I clocked 28 hours of work--then another 12 hours on Wednesday.  It wasn't my idea of "welcome home," but as a result, I sold my 18th home in 11 months and I booked myself a massage!  Guess I can live with that :-)  The one thing I was really looking forward to doing when we got back was meeting with the architect regarding the paint scheme for our house.

Several weeks ago, I gave him a general paint color that we liked for the body, then told him to have fun.  He did just that!  He presented us with 4 color schemes, plus a stack of colors we could pull from if we didn't like what he came up with.  Are you kidding?!  I loved what he put together and of the 4, these were our two favorite palettes...very similar, but with different levels of saturation. 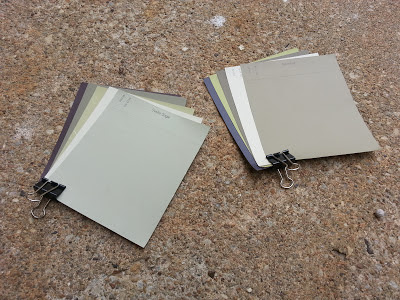 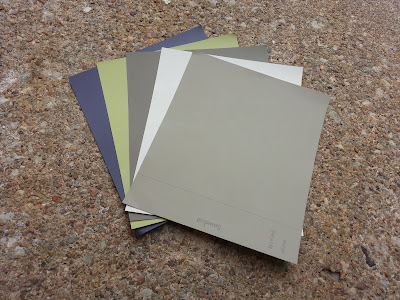 I pulled the green accent color from the stack with less saturation and this is how the grouping looks!  I never, ever, would have put purple and green together BUT I think the architect is on to something :-)  Next up is buying a few samples of paint, slapping it on the backside of the house and seeing what it looks like in real life! 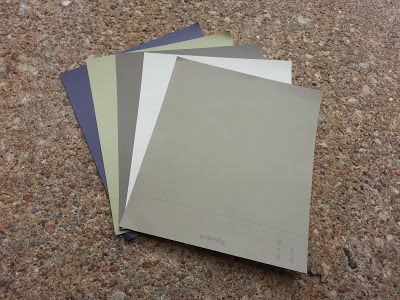 If anything, it will look more "bungalow-ish" than our existing (and failing) khaki and white colors that came with the house!  The beige worked well when it was time for the last owner to list the house, but it's just not me (ie exciting) or historically accurate for our home's style.  I seriously cannot wait until it's time for the painters to get working on our house!!! 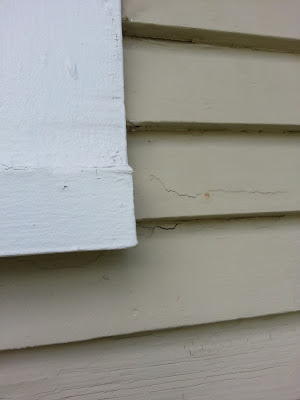 In just a few weeks, it will be time to paint the nursery...I've been so preoccupied with the house that I haven't even thought about wall colors for the baby's room!  I have a color scheme in mind if Lil' Britney Griner is a girl...and one in mind if L.B.G. is a boy...but I certainly haven't committed to anything.  My guess is that once we know if L.B.G. is a girl or boy, I'll be in the mood to figure things out!  Most importantly, though, I'm just glad that someone else will be painting the outside of our house while we only have to paint four bedroom walls :-)