Our Wedding (Looking Back)--Save The Dates

It's crazy to think that just one year ago this date completely freaked me out.

When I flipped the calendar over to September 2010 it meant that our wedding was just 24 days away...school had just started back up and I had so much to get done in the next three weeks.  I wanted it to still be August but sometimes you just don't get your way!

We ended up having a small wedding.  I always thought that when you have a small wedding, there are less stressors.  Ha!  Turns out, with a small wedding you have all the stress of a large one--plus, you end up dealing with the hurt feelings of all the people who were not invited.

Because the wedding was small, there was one thing in particular that a lot of people never got to see...our Save-the-Date card.

I may be biased but I happen to think it's the greatest Save-the-Date ever!!!!!! 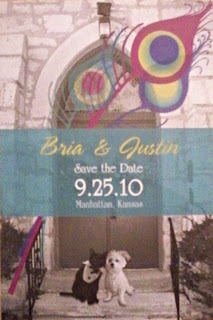 First, please excuse the quality--I couldn't find an electronic copy so I took a picture of the card!

To this day, I still love it!  I had found a doggie veil for Mitzi and a tuxedo vest for Malcolm at Hobby Lobby...I took pictures of the two of them all dressed up and then my friend, Erin, photoshopped them so they would be sitting together.  Next, I gave her a picture of our church's entrance and she made it look like the animals were actually sitting on the church steps!  I was kinda worried what our priest would think about it but he thought it was hilarious!

Thanks again to Erin for all of her awesome graphic design skills!  If you ever want to check out more of her work, go to http://eringarrett.wordpress.com/.  She doesn't disappoint!
Posted by Taddy-Long-Legs & J-Money at Thursday, September 01, 2011

Email ThisBlogThis!Share to TwitterShare to FacebookShare to Pinterest
Labels: celebrations