Another Recipe for the Books 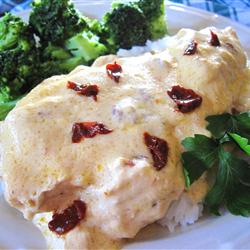 We're almost two months into the school year and I'm still on my slow cooker kick.  I've think we've only cooked 2 or 3 meals either on the stove or in the oven this entire time...it's so easy to come home over lunch to let the dog out and bring the cat in to eat, throw some stuff into the crockpot and come home to find supper waiting on us!
For the most part, we've been able to avoid rotating recipes.  There's so many sites on the Internet that we could probably have a different meal every night for several months.
Justin and I tend to like our food on the spicy side...in his world, that also means salty.  I'm not sure how he equates salty to mean spicy, but to me--spicy is just that, spicy!

I found a recipe on Allrecipes.com while preparing our weekly grocery list.  As we've both been fighting colds and our heads are full of congestion, I figured a little chipotle pepper might clear out our sinuses!  The recipe called for about 3 peppers--I put in 7 or 8...it had some heat but unfortunately it did not solve our head problems ;-)

1 (10.75 ounce) can condensed cream of chicken soup (we used the light version)
1/2 cup chicken broth
1 (8 ounce) package cream cheese (once again, the light kind) cut into cubes
3 chipotle peppers in adobo sauce, minced
1 tablespoon adobo sauce from chipotle peppers
Directions
Place the chicken breasts into a slow cooker, brush with butter, and sprinkle with salt, pepper, and minced garlic. Pour in the cream of chicken soup and chicken broth, and add the cream cheese, peppers, and adobo sauce. Stir the mixture gently. Cover, set the cooker to Low, and cook for 6 hours...I just put some butter straight from the fridge into the crockpot and it didn't make any difference--I didn't cube the cream cheese either.  A good stirring at the end combined everything very well!  Also, I chunked the chicken before serving...slow cooked chicken breasts just aren't visually appealing to me :-)
Posted by Taddy-Long-Legs & J-Money at Tuesday, October 19, 2010