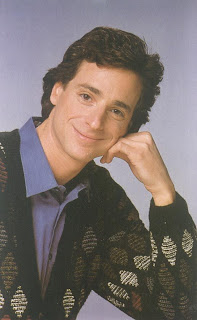 I am more than happy admitting that I am a neat freak...if any of you remember Danny Tanner from the tv show "Full House," then you will have an idea of what I'm like!

When I first started dating Justin, I realized just how much of a neat freak that I was...and how messy he was!  Don't get me wrong here--I'm not trying to throw him under the bus!  However, he will admit that he leaves things laying around for days (and even weeks) at a time and it doesn't bother him at all.

Clutter is my enemy.  I can't handle it.  It's like my brain literally breaks down upon the first sight of it.  In college, I always had to pick up my apartment and put all the day's stuff away in its proper place before I could even focus on homework.  My neatness might be a bit much, but at least I always know where everything is and even a stranger could find something if they had to!  But after combining households with Justin, my preferred level of neatness no longer exists...however, I'm USUALLY able to find what I need to!


Last spring, I was in The Clay Gourmet and saw these great little containers.  They're made by OXO and even though they're designed for food storage, they can be used for anything :-)  We have acquired a few of them in a variety of sizes since first seeing them...I would love to have more but they're not the cheapest thing.  A 10-piece set at Bed, Bath & Beyond runs about $100!  Target and Dillons both carry them but unfortunately there is no price difference between retailers. 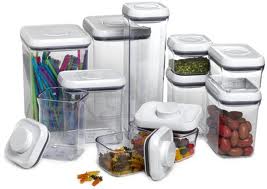 We have mainly used them for storing coffee, rice and Justin's Cinnamon Toast Crunch...because of the way they seal, it's nearly impossible for the contents to go stale.  My coffee is just as fresh two weeks later as it was the day I opened it!
Ideally, I would love to have my entire pantry done in these OXO containers.  One, it would be such a nice sight everytime I open the door but most importantly, everything would be super organized and easy to identify!  But then I could almost guarantee that Justin would come along and undo any order I had established ;-)  Gotta love husbands!
Posted by Taddy-Long-Legs & J-Money at Sunday, October 10, 2010