First, I would never claim to be thankful for my common sense because somedays I'm convinced I missed the Common Sense Boat.  But....I am thankful for all of my 5 senses.

This may sounds lame and cliche to some.  However, one of the district Occupational Therapists and I were talking a few months ago about would we rather lose our hearing or our vision--assuming we could only have one and not the other...and I would definately give up my hearing first!

In college, I babysat a school-aged boy who was blind and essentially had no vision since birth.  He never knew what the world around him looked like.  Intellectually, that made sense.  But one day, he forgot his cane at school so we went back to pick it up.  Once we got out of the building, he started running and skipping with excitement...but suddenly he stopped and said, "Woah--babysitter. How far have we gone?!" with obvious panic in his voice.

Because of the running and skipping, he was unable to gauge how far he had gone...therefore, he had no idea where the sidewalk would end, how quickly the driveway was approaching or where the curbing was.  When walking, he knew exactly where everything was.  For me, that was an eye opening experience (and really, no pun intended!!!).  I take so much of my surroundings for granted and to think that running a few feet would throw you into a world of the unknown...

Back to the question posed by the OT.  Really, I don't want to lose any of my senses.  I've never had glasses--last time my eyesight was checked, it was 20/13.  My hearing is pretty good except for those days when I'm really congested :-)  My sense of taste is superb, my touch is tactile and my sense of smell is pretty good...except for, once agan, I'm congested!

I'm a VERY visual person.  I could spend hours at a time studying an inanimate object and love every minute of it...earlier this week, K-Mart received their shipment of "unique" Poinsettas and I had been waiting all season long for them.  The pink ones were absolutely stunning but I couldn't resist a blue one!

This is not the best picture of the plant, but it does show the flecks of glitter.  I know they doctored the plant up, but it's still gorgeous...and something so simple makes me thankful for my senses allowing me to enjoy the world around me :-)  And as pretty as they are, I may be tempted to fill our hearth with them next Christmas season! 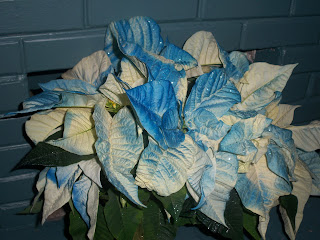