While making my grocery list earlier this week, I came across a recipe for slow cooked Asian Shredded Beef.  Per the reviews, it pretty much sounded like bulgogi--since making bulgogi can be time consuming I was excited to find a recipe that did all the work and guaranteed a tender piece of meat.

I threw all the ingredients in the crockpot this morning and when I came home from work, the house smelled delicious.  As I was walking in the Mayor's Holiday Parade, Justin started the rice and supper was ready when I got home.  I was so excited to try the bulgogi!

The recipe was an epic failure.  Salty doesn't even begin to describe the sodium content.  Don't get me wrong--I love salt and generally think things are on the bland side...after all, I would be thrilled if someone gave me a salt block!  But holy cow--I couldn't even eat the meat because it was so salty.  The flavor was good, but something tells me the soy sauce/ketchup/hoison sauce combination was a bit much!  In the future--if I'm ever brave enough--I may try it with reduced sodium soy sauce and a tomato paste v. ketchup.

And I think part of the problem was an Asian rib recipe we tried over Halloween weekend...I keep thinking about it and comparing other meat dishes to it!  I had just seen it on Allrecipes.com and as it turned out, Hy-Vee had the short ribs deeply discounted that particular week...so I just had to try it!

I skipped the whole marinating part and the meat still soaked up tons of flavor....only suggestion: cut back on the amount of sesame oil and olive oil.  I realize oil plays a huge role in marinating meat but the ribs produced enough grease on their own...and the additional 6 Tablesppons of oil was ridiculous.  I would guess that adding a bit of sesame oil at the end would give you enough flavor to satisfy the taste buds! 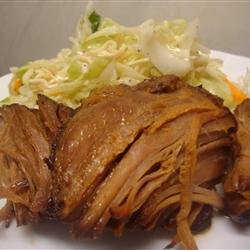 1.Stir together the brown sugar, soy sauce, sesame oil, olive oil, rice vinegar, lime juice, garlic, ginger, and Sriracha in the crock of a slow cooker. Add the ribs; cover and refrigerate. Allow ribs to marinate in the refrigerator for 8 hours or overnight.

2.Before cooking, drain marinade and discard. Cook on Low for 9 hours. Drain cooked meat and shred, using 2 forks.  Serve with hot rice or shredded cabbage for a crunch (yes, this sounds crazy but I like serving it with Asian meat dishes--it doesn't add any flavor but rather texture).
Posted by Taddy-Long-Legs & J-Money at Friday, December 03, 2010